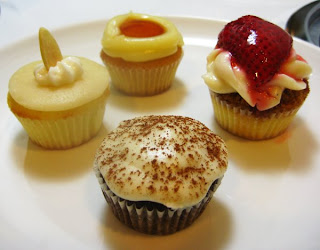 For a combination of reasons, a friend came over to have a bake date last Saturday and we made 4 varieties of cupcakes. It was amazing how much quicker it went with the extra help! And the input and feedback was great. We had a couple genius breakthroughs that wouldn't have happened if I were working through it on my own.

I think the highlight of the day was the Flan cupcake. I had been experimenting with custard frosting before, with less than enthusiastic success, so was determined to get it really good this time. I had a recipe I swiped off the interwebs that went something like:

It sounded believable. The first time I ever made it, I was trying for a mocha frosting and thought that custard would be a really nice way to richen it up. I should have taken better notes on how thin and runny the result was the first time, but I hadn't figured out the science of why, so blazed on.

The instructions for this custard frosting:
mix sugar and flour, then add egg and milk and mix together with vanilla. Heat until thickened, then cool completely. Then, whip together the butter and powdered sugar, gradually adding this custard to the butter. 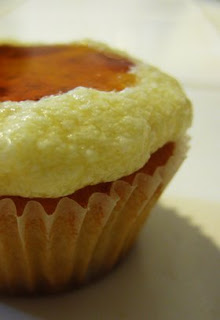 Is it because the milk in the custard is JUST too liquidy? Too much for the powdered sugar to compete with that it turns your delightfully firm and gelatinous custard and whips it down into a confectioner's icing instead? Does the liquidy milk fight with the fatty butter?

So after 2 batches of custard were basically wasted, we figured out that just piping cooled custard straight on to our caramel cupcakes was good enough, that's just what we did. And quite a delightful texture it was. In our excitement, we piped up a bunch of cupcakes, mini and regular alike, and set little 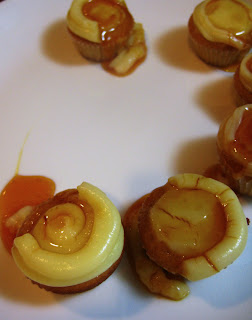 pools of highly viscous caramel into the custard cup. Merrily we worked until I realized: wait. The custard is breaking! Literally cracking apart under the weight of the caramel. Slowly, all our efforts began to look like remnants of some ancient cupcake culture as they crumbled to their decripit fate.

So now what? Is this project supposed to fail miserably? I want so badly for it to work because the potential is so high. One batch of custard more and we realized that patience was the only ingredient we were missing. 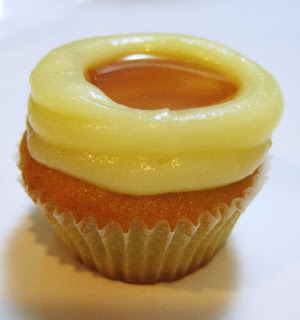 Custard, like most milk-based products, once heated develops a sort of protective skin. We simply hadn't waited long enough for that skin to form in order to load the heavy caramel onto it. Once the custard had set, this experiment finally received the seal of deliciousness.
Posted by Unknown at 5:34 PM 1 comments 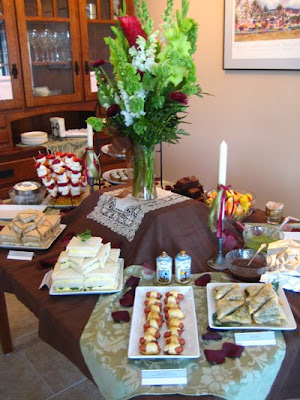 A couple weeks ago I had the privilege of hosting my best friend's Bridal Shower. Back story is that I'm terribly anxious about the whole wedding scenario and all the responsibilities I have with the maid-of-honor role. I've hardly been to any weddings, much less participated in them, so I feel a bit overwhelmed with it all. On top of the fact I'm torn between enjoying the big family/friend get-togethers that weddings provide, and disliking the kitsch that usually goes into putting them on. All the traditions, taboos and conventions seem very contrived in this day and age, and have my head in a whirl.

So, initially I was pessimistic. Despite my best efforts, I don't think I hid it well, and felt bad that my best friend was lacking the proper "squeal" reaction most other girls might have provided upon seeing her ring, or hearing the proposal story, and all those other cutesy things girls go ga-ga over. I AM happy for her, and I think she's found a great match. She told me she appreciated me for the way I was, which was comforting, but I feel sorry for her that someone else hasn't fulfilled the role of "squealer," to help satisfy that inherentaly girly attribute. (Or maybe someone has and I don't know about it).

The other funny thing worth mentioning is how adament my dear friend has been about not being a Bride-zilla. She goes out of her way to make sure that she's kind and considerate of those around her involved in the planning process, and while she knows what she wants, she's not stepping all over people to get it. I appreciate that, but am also amused at how concerned she is, second guessing herself occassionally: "That wasn't too bridezilla was it??"

Well, apparently I'm a bridesmaid-zilla. Yeah. Out of this meek and mild-mannered girl grew this beast of anal-retentive perfectism I did not know existed. I'd like to think I was at least nice about it, but I sure did have an opinion about how I wanted her bridal shower to look, taste, flow and almost fit it to a budget (thanks mama, for helping with the rest!). What's funny is how I had no idea how picky I could be. So, lesson learned is that if I ever get married and do the big ol' fancy wedding: watch out world!

Anyhow, the funnest part was making the food, of course. The idea was high tea (er... well, it was really afternoon tea, and by tea, I mean beer and mimosas. I'm pretty sure only 1, maybe 2 cups of tea were actually poured the entire afternoon). But it did include tea sandwiches (egg salad with watercress, chicken salad with almonds and celery, and cucumber with cream/goat cheeses), spanakopita, pigs in blankets, proscutto wrapped dates, brownies, mini carrot cupcakes, and the prize of the event: Angel food skewers.

I had made some angel food cupcakes which tasted quite fine, but were seriously lacking presentation awe. It had been the one request my dear bride-to-be had made, so I felt compelled to fulfill it with extra umph. So I cut up the angel food into squares (just before the party started, as they did dry out the longer they were out), then popped them onto bamboo skewers, alternating with fresh strawberries and then providing a whip cream dip along side them. For presentation, I sliced some fresh pineapple and laid it on a plate, skin-side up, tied it down, then poked the skeweres into the pineapple so they stood straight up. It looked fantastically dangerous, which is a good way to describe my friend, so felt extra clever for coming up with it.* 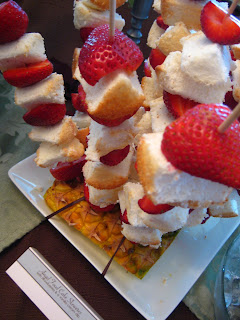 *I totally stole the idea from a caterer whom I'd witnessed doing the exact same technique with fruit salad skewers not a week earlier. I didn't have to tell you that. I could have taken all the credit and no one would have known.
Posted by Unknown at 9:33 PM 1 comments