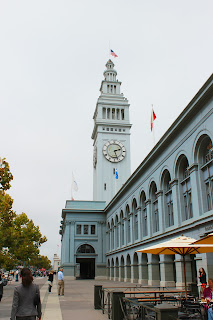 This year's Scharffen Berger Bakery Crawl took me to 3 new places I had never been before, as well as one repeat. I was also pleased to be a resident of the the city of San Francisco this time, and may have overly enjoyed the fact I could just catch BART to get to and from the tour. I have only recently made the move, so yeah, it was kind of a big deal to me.

This year's theme was cookie sandwiches. One of the SB reps suggested that they thought the cookie sandwich might be the "next big thing" to out stage cupcakes, but there was some debate about whether or not cake pops were going to be. Time will tell! In any case, our tour was dedicated to finding these said cookie sandwiches, which did come a wide variety of shapes, sizes, types, and flavors.

As last time, we started off in the Scharffen Berger's only brick and mortar shop that is in the Ferry Building along the Embarcadero. Conveniently located adjacent to Miette, a delightful bakery with a variety of tasty treats. Our sample was of a chocolate macaron with sumatra coffee ganache filling. I'm not really into coffee, but the flavor was not overwhelming and the cookie was actually not too sweet, which a lot of macarons can be. Cute little packages, too. 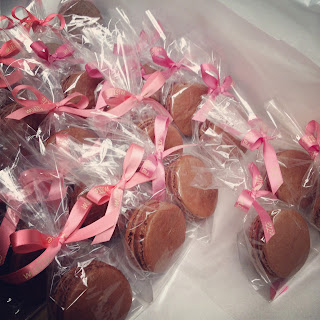 We were then corralled out into our trolly car, and headed down into my neighborhood, the Mission. We came to Goody Goody Cream & Sugar, a cafe that has apparently won best chocolate chip cookie in the city award.  Not what we were there to try though. The owner is a long time food industry veteran who had gotten burned out and decided she needed to call the shots, so opened this place up with her family. 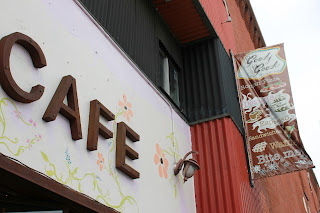 It was a fun spot in a kind of worn down looking block across from this amazing mural. 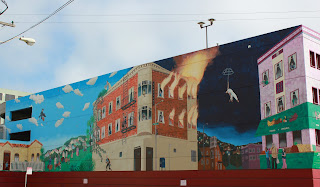 She created for us the most amazing flavor combo I have ever had in a cookie sandwich. Oil cured cocoa wafers filled with a buttercream with preserved lemon and fresh basil. I know right, what the hell is that going to taste like? It was amazing. I was super skeptical since I've had some pretty overwhelming basil-in-my-dessert experiences, but some how this one worked perfectly. No flavor out-did any other. The cookies were super crisp and nutty, and had a nice salty flavor, and the lemon and the basil worked together being a combination of tart, sweet and savory. I definitely took 2. 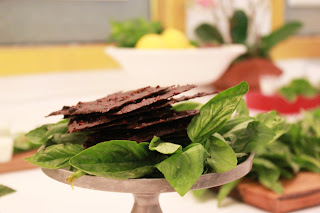 We got back in our trolly and headed over the hill to Cole Valley to Ice Cream Bar. 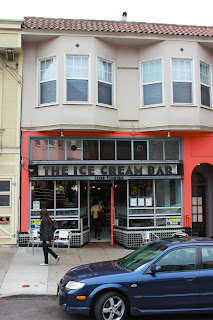 It had a cute interior, with a very retro feel. 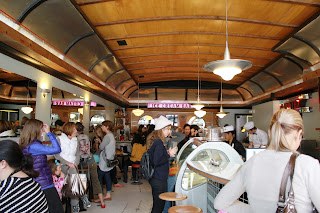 The owner served up an amazing platter of ice cream sandwich cookies. It was by far the worst episode of food paparazzi, as we couldn't stop taking pictures of the amazing pile of perfectly stacked sandwiches, but the owner finally forced them upon us since they were in fact filled with now melting ice cream. 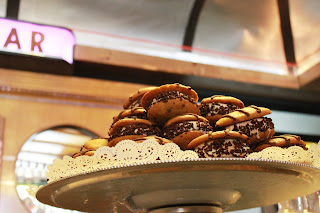 When I first read the flavor on the cards we were given at the start of the tour, I was also skeptical. I am not a big banana-in-desserts fan, and worried that the flavor would overpower the whole piece. Ok, here's the mouthful: Caramelized honey and milk chocolate ice cream sandwiched between 2 banana and cocoa nib cookies (with caramelized cocoa nibs studding the sides, also). 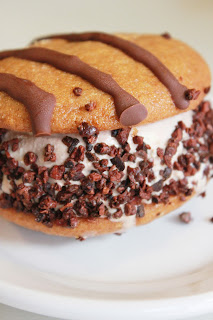 I ate the entire thing. I mean, it was the size of my fist, let me be clear.

It was so good. The banana flavor was not super strong and the cookie was super soft and puffy. The ice cream was creamy and perfectly sweet, which worked against the crunchy and slightly bitter cocoa nibs that you got a little bit of in every bite. It was just an amazingly well crafted flavor and texture experience. 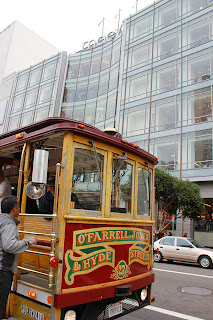 Trundling back onto our trolly, we landed at our final stop. Here we are parked in front of Macy's Union Square. We were going into the cellar to watch Yigit Pura do a demo on making an amazing custard based ganache (learned something new!) and got to sample one of his fancy cookie sandwich creations as well. He was also extremely high on sugar, which made him all the more entertaining. 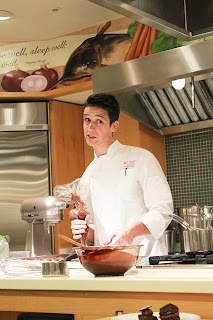 We then popped upstairs to the 3rd floor of Macy's to see his brand new pastry shop, Tout Sweet. A very bright, open and welcoming space, with so many tasty treats to tempt you with. 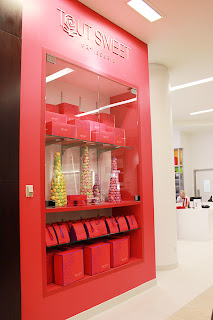 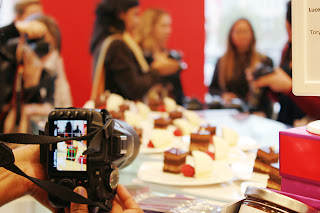 Ok, maybe this was the bigger food paparazzi moment. 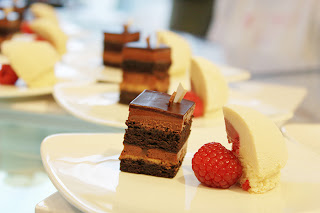 I don't even know what he had us try, but it was delicious. Also noted that he put a nice smooth raspberry jam filling into each lated raspberry. The details!

It was a delightful end to the trip. We got hang out and chat with him about his presentation and his career moves (the shop had literally opened only 3 weeks before, so he was still working on his baby). He also just started offering some savory options, of which I recall sous vide egg sandwiches being on the menu. Must go back! 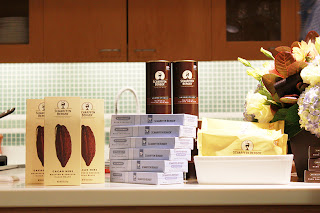 Another year, another contest - with a bigger prize this time: www.chocolateadventurecontest.com/