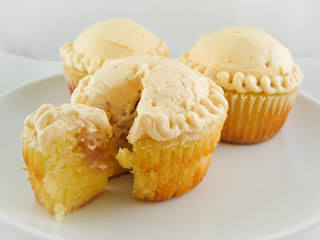 Happy π Day!
In celebration of March 14, I made a pie inspired Apple Pie Cupcake. I thought this was a cute idea, but it didn't turn out to be the most photogenic one. Beige frosting on beige cupcake with white wrapper on white background. If I thought ahead, I could have at least saved one of those deliciously green Granny Smith's to pop in the background for a boost of color. You will simply have to take my word for the fact they're quite tasty even though they look rather dull.
Make Approx. 16.
Apple Juice reduction:
Boil down 1 cup of apple juice until thick and syrupy - approximately 2 tablespoons worth. Cool.
Basic Vanilla Cupcake:
1 1/2 cups all-purpose flour
2 tsp baking powder
1/2 tsp salt
1 cup plain yogurt (or sour cream, or buttermilk)
1 cup sugar
3 eggs
1/2 tsp vanilla extract
1/2 cup oil
Preheat oven to 350˚. Line cupcake tins.
In medium bowl, whisk together dry ingredients. In larger bowl, beginning with gently whisking eggs, mix together the rest of the wet ingredients. Mix dry into wet until blended.
Filling:
1 tbs butter
2 granny smith apples, peeled, cored and sliced.
3 tbs brown sugar
1/2 tsp cinnamon
In a medium saucepan over medium heat, melt butter and add apples. Once the apples start to sizzle, add a dash of water and cover with lid for about 5 minutes, or until apples are semi-translucent. Break apples up with a wooden spoon until only smaller chunks remain. Add brown sugar and stir until apples are coated and syrupy. Remove from heat.
Frosting:
3/4 cups butter, room temperature
2-1/2 cups powdered sugar
2 tbs apple juice reduction
Whip butter until smoothly. Slowly add in powdered sugar until combined. Scrape sides of bowl before adding the apple juice reduction. Whip until smooth and creamy. I added a little dab of red and yellow food coloring to try and get the color a little more "baked pie crust" color, but should have done a little bit more.
Once the cupcakes are cooled, remove centers of cupcakes using a melon baller (or any other tool you prefer). Fill cavity with apple sauce filling. Pipe a large dollop of frosting onto each cupcake. Using an offset spatula, smooth each dollop into a uniform mound, tapering at the sides. Using a small frosting tip, pipe curly cues around the edges of the cupcake, to make it look like a pie crust.  I tried putting little divots in the tops of each cupcake, similar to the venting holes you cut into pie crusts, but they didn't look very good, so I did without. I highly recommend using a different colored cupcake wrapper too. Gotta liven these up a bit.
In any case, Happy Pi Day. I want to leave you with a little Pi story that I just learned about recently. Back in 1897, the Indiana legislature almost passed a bill to legally define pi as a rounded off 3.2. Their only saving grace was the presence of a Mathematics professor from Purdue who gave the Congress an impromptu math lesson on why that was impossible. Nice try!
Posted by Unknown at 11:10 PM 1 comments 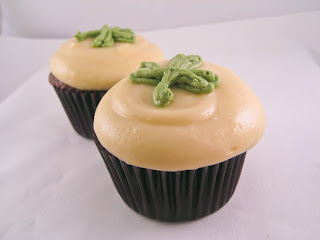 Yeah, it's that time of year again. Guinness cupcakes are all over the place. And for good reason: they're tasty. The subtly bitter beer flavor pairs well with chocolate. But unlike the standard Irish Cream or plain cream cheese frosting, I thought I'd go over board this time.
Taking a tip from the Tiramisu cupcakes I make, (which I realize now I haven't actually posted), I opted for a whiskey "curd" that is then mixed with cream cheese and mascarpone to make a soft, rich and flavorful frosting that kicks buttercream's butt any day. Not that there's anything wrong with buttercream, but did you hear me say mascarpone? Can you ever beat that, really? Besides, you can pack in a lot more alcohol flavor in this way. ;-)

Whiskey Curd
Best to make this first as it needs time to cool.


In a heat proof bowl, whisk together egg and sugar until creamy. Heat over a saucepan of boiling water (don't let the bottom of the bowl touch the boiling water), whisking constantly for about 15-20 minutes (should get a little thick). Pour in whiskey and whisk until mixture is thick like pudding). Remove from heat (be careful of the steam) and pour into a cool dish. I just let mine sit out until I was ready to make the frosting, but you could cover closely with saran wrap and let cool in the fridge. It keeps for a couple days too, if you want to make it ahead.

Guinness Cupcakes
(I stole this recipe a while ago so am not even sure where from any more. Sorry blogosphere!)
Makes Approx. 12-15 cupcakes

Preheat over to 350˚. Line cupcake tins.
Heat Guinness and butter in a saucepan until butter has melted. Whisk in cocoa and then sugar. In a separate bowl, mix sour cream, egg, and vanilla. In a bigger bowl whisk together flour and baking soda. Gradually pour the Guinness mixture into flour bowl until just incorporated, then add sour cream mixture. (This is totally backwards from how the instructions were written, but it seemed to work fine).
Fill cupcake liners 3/4 way full (exactly 1/4 cup measure will do, btw, which is my preferred method for filling tins).
Bake for 20 minutes. Cool.

Whiskey Mascarpone Frosting
Once curd and cupcakes have cooled, make frosting. This will make more frosting than you have cupcakes for, but not quite twice as much (if you were to double the cupcake recipe).


Whip cream cheese and mascarpone together until smooth. Scrape sides of bowl, then add in curd gradually, making sure to scrape the sides of the bowl as you go. Once incorporated and fluffy, add in the powdered sugar, and whip until the mixture has firmed up slightly. It's going to be a pretty soft frosting, so don't try anything too fancy as far as decorating or piping. A dollop on top of the cupcake works nicely for me. You can add a more firm buttercream frosting on top if you want to get fancy with the St. Patty's Day pride.

Don't eat cupcakes and drive!
Just kidding, they're not that strong. But do enjoy! 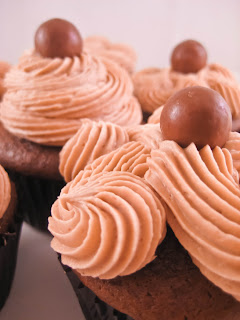 I wish I could have gotten around to this idea earlier. I thought I was coming up with something SO unique when I thought about making a malt ball cupcake. No such luck. The blogosphere has been exploding with malty recipes, so I'm just jumping on the band wagon with this one.

Taken almost verbatim from Pennies on the Platter, indirectly linked via a post by BrownEyedBaker, I whipped these up last night. Critique: Tasty, kind of light (in other words you could eat a bunch of them without noticing; be that a good or bad thing), but I'm not sure how "malty" they are. Subtle at best, but this could have just been a side effect from eating half the box of malt balls while baking, making the flavor of the cupcakes pale in comparison. Regardless, they were very tasty. The cupcake was moist, which fulfills basically 50% of my cupcake critique.

Preheat the oven to 350˚F.  Line cupcake pans with liners.

In a large bowl, whisk attachment to blend the milk and malted milk powder.  Mix until the powder is dissolved.  In a separate medium bowl, whisk together the flour, cocoa, sugars, baking soda and salt.  Slowly add the flour mixture and the oil to the milk mixture until incorporated.  Add eggs one at a time until incorporated.  Stir in the sour cream and vanilla until just combined.
Fill cupcake liners 3/4 full. Bake for 20 minutes.
Cool completely before frosting.

Make Frosting:
Whip the butter in bowl of an electric mixer on high speed for several minutes until very light and fluffy.  Stir in the malted milk powder and cocoa.  Whip on medium-high speed for 1 minute.  Slowly add the powdered sugar about 1/2 cup at a time. Mix until the frosting becomes thick enough for piping.

Pipe frosting on top of cupcakes and top with a chocolate covered malt ball.