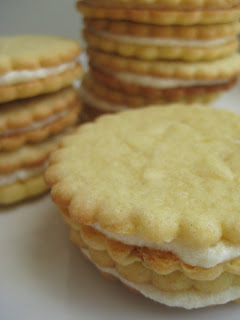 You read that correctly, but I do mean these cookies were made with Ugli fruit.

Backstory: I went on a lovely vacation a couple weeks ago (yeah, I'm just catching up on life now) to visit my ol' college buddies who still live on the East Coast. Good times, ate too much, tried lots of desserts (lots of cupcakes), which I thought I would blog about, but am not sure I'll get around to it now. I'll just do a quick shout-out now to the one cupcake that really stuck in my mind that was from a place in DC called Red Velvet. Not too crazy about their actual red velvet flavor, but their special that week was a cherry ginger with yuzu buttercream, and it was pretty amazing. I'm a sucker for anything yuzu though, so that could be why I fell in love.

But I digress. Another highlight of my trip was the chance to bake something with my friend and fellow blogger, Kristy, which is a rare occasion considering the 3000 miles that are generally between us. We thought it would be fun to bake with something neither of us had tried before. We settled on rhubarb, and were certain that the posh grocery store Dean & Deluca was sure to have some. Our dreams were dashed when we discovered we were wrong, so struggled to come up with a plan b on the spot. I was tempted by the fresh passion fruit which honestly, I've never even seen before in person (yet no rhubarb? Com'mon D&D, get with the program). But Kristy pointed out this "special" looking citrus that was begging to be made into something sweet. Tempted by its description as being somewhere between a tangerine and a grapefruit, we snapped a couple up and headed home to experiment.

Kristy recalled a grapefruit cookie recipe that she'd been meaning to try, so we went to it. It is a delightful, rolled butter cookie with a smack of grapefruit buttercream sandwiched between to cookies. I took on the task of zesting and juicing the fruit while she made the cookie dough. I also took an opportunity to document the process, as this fruit was pretty stellar to photograph. It had a very asymmetrical, lumpy shape about it, with a sort of greenish yellow hue to its rind. It was a little larger than a grapefruit, and not nearly as firm. When it came to cutting it in half, to our surprise it was brilliantly orange inside. As well, it seemed like the fruit was naturally separating itself from the pith, which I don't think I've ever seen happen before.
After making the cookies (which we made verbatim to Martha's recipe, minding the change in fruit), we discovered that the Ugli fruit is way more subtle than grapefruit, so in my opinion, would add a bit more zest and, as well, add zest to the buttercream. I also think I would cut down on the amount of juice that goes into the buttercream as it seemed a bit too runny for a filling and we had to keep the cookies refrigerated so they wouldn't get too sloppy.

But an overall success, and fun attempt to try something completely new.
Posted by Unknown at 10:30 PM 0 comments 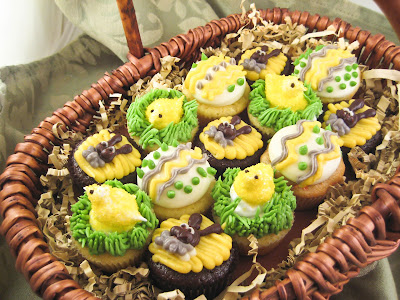 For a special Easter treat, I will be making cupcake Easter baskets, available to order. A baker’s dozen of 3 mini cupcake varieties: Carrot cupcakes with cream cheese frosting decorated as Easter eggs, Zesty lemon cupcakes with homemade marshmallow chicks, and Chocolate malt cupcakes with ganache chocolate bunnies, all arranged in a decorative basket.
$45, plus tax. 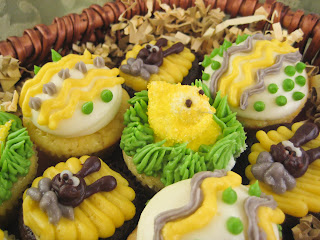 Please order by this Friday, April 22. No early orders can be filled. Pick up Saturday afternoon (local orders only).
Posted by Unknown at 7:55 AM 1 comments 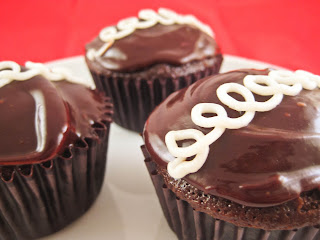 I was about to call this a "Fauxstess" cupcake, but realized that the name is reserved for the more vegan alternative to our dear "Hostess" cupcakes. These are not vegan, not even kind of close, so I guess I'll have to relegate them to simply "Hostess knock-offs." A rich chocolate cupcake filled with a homemade marshmallow filling and topped with semi-sweet ganache and the classic white swirl. Growing up, these were some of my favorite "bribes" my dad would offer in order to get us to go with him to walk the dog each night. I mean, I don't think I really disliked taking the dog for a walk, but the extra incentive was always appreciated.

So, these are definitely a little more "real" tasting. I haven't had an actual Hostess Cupcakes in a many years, mostly because I am afraid to know what's in them. Not to suggest that these homemade versions are "good" for you, but at least I know the ingredients that go into them are not chock full of preservatives.

A quick note about the filling. Today a couple friends and I got together to work on prepping for some Easter goodies. We decided to make homemade Peeps (a later post), which are basically molded marshmallows. Having made what I thought was French Meringue once, I noted that it was super similar in flavor and texture to marshmallows, so thought it would work very well as a marshmallow frosting which could be piped into little chick shapes. What I didn't know, was that I was actually making Italian Meringue. I found a very helpful article about the difference in Meringues here, via Martha Stewart. I think this is also called boiled frosting, and any number of other code names. In any case, the texture is lighter and stickier than marshmallows, but it worked for its purpose.

Heat cream and corn syrup until they reach a boil. Pour over chocolate and let set approximately 2 minutes. Whisk together until fully incorporated. Set aside to cool (do not refrigerate as it will get too hard).
So, you don't really need to add corn syrup to ganache, but it really does smooth out the texture and add a really nice sheen to the chocolate which is very appealing. If you have dietary restrictions or just don't like to use corn syrup more than you have to, you can skip it. Maybe just up the cream by a couple tablespoons or so, and add a tablespoon or so of butter to help the texture. You can also add vanilla, if you're so inclined.

Alternating between flour mix and water mix, beginning and ending with flour, mix together with sugar/cocoa mixture until incorporated. The batter will be a bit on the runny side, which you can control with how much water you put in. I think somewhere between 1/2-3/4 cups water in addition to the milk make an excellently moist, but still stable cupcake.

Bring sugar, water, and corn syrup to a boil in a small saucepan, stirring until sugar dissolves. Cook, undisturbed, until syrup registers 248 degrees on a candy thermometer.

Meanwhile, whisk whites with a mixer on low speed until foamy. Add salt and cream of tartar. Increase speed to medium, and whisk until soft peaks form, about 8 minutes.

Reduce speed to low, and pour hot syrup down side of bowl in a slow, steady stream. Increase speed to high, and beat until mixture stops steaming, about 3 minutes. Fill piping bag with frosting - fit it with any large circular tip you have on hand.

Once cupcakes have cooled, cut out the centers either with a melon baller or apple corer (you probably want a larger hole to cram as much fluff into the cupcake as possible). Fill each cavity with the marshmallow cream filling. Dip each cupcake in the ganache and swirl slightly to coat the top completely. If your ganache got a bit too hard to do this with, defrost in microwave for no more than 10 seconds and stir until smooth.

Let the ganache set for a bit. So, I happened to have a bit of leftover buttercream so I could easily pipe on the little swirls. It would kill me if I had to make a whole batch of it just for decorating the tops of these, but if you must do it, here's the recipe for a small batch of frosting:

Vanilla Buttercream Frosting
Beat at medium speed until creamy
1/4 cup butter, room temperature
Add in
1/2-3/4 cup powdered sugar
until mixture is crumbly. Scrape down the sides, then add
1/4 tsp vanilla
Beat until mixture comes together. Beat in
a few drops of milk
to smooth it out.


Fill a small pastry bag fitted with a small circular tip with the frosting and gently pipe out the swirls on top of each cupcake. They are a little tricky to make look consistent. Good luck!