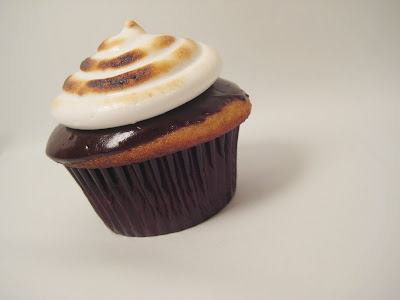 As the summer season begins to wane, I begin to feel nostalgic about those last few days we used to have before school would start; trying desperately to hold on to the freedom and adventure we so foolishly took for granted in early July.
As an adult, the sense of panic doesn't get much better. I question whether or not I really appreciated all that the summer had to offer: did I enjoy the warm weather enough, the late daylight saving's evenings, or the fresh ingredients of the season, etc. And as much as I adore and eagerly look forward to what Autumn has to offer, I find I'm still scrambling to hold on to all the good things about summer before it's all washed away in the sea of Halloween Costume stores.
So, to keep it alive with just one more recipe, I fall back on family tradition: camping. And what makes camping really camping? Roasting s'mores over an open fire, of course.
I have over the past couple years been on a fairly epic quest to perfect a s'more cupcake recipe. Sadly, I don't think I'm 100% there, but this latest version does have a very appealing look about it. AND I got to use my little kitchen torch, which is always fun.
To start, I attempted to combine a vanilla cupcake recipe with a graham cracker twist:
Graham Cupcakes:
Preheat oven to 350˚
Line approximately 20 cupcake tins.
Whisk together flour, baking soda and salt and set aside. In electric mixer, blend butter, sugar and honey until creamy, scraping down sides occasionally. Add honey and one egg at at time until incorporated. Beginning and ending with flour mixture, add flour and buttermilk alternately. Fill cupcake tins. Bake for 20 minutes. Cool.
Then dip each cup
cake top into
Chocolate ganache:
Pour warmed cream over chocolate and let sit 1-2 minutes, then whisk together until smooth. I occasionally have to stick the mixture in the microwave for 10 second intervals until all the chocolate is melted. Be careful not to overheat, as it will begin separate. Bad.
Once your cupcakes have a healthy topping of chocolate, then comes the marshmallow! With a stand mixer, making marshmallows from scratch is a cinch, albeit messy. Luckily, I was able to get the freshly made marshmallow cream to my piping bag without much hassle, and it piped onto the tops of the cupcakes perfectly.
Marshmallow "Frosting":
In bowl of a stand mixer sprinkle gelatin over 1/2 cup cold cold water, and let stand to soften (about 5 minutes are needed).
In a heavy sauce pan cook sugar, corn syrup, 1/2 cup water, and salt over low heat, stirring until sugar is dissolved. When it begins to boil, stop stirring. Boil until candy thermometer reaches 240°F. Pour sugar mixture over gelatin mixture, stirring until gelatin is dissolved.
Beat mixture on high speed until white, thick, and nearly tripled in volume, approximately 6-8 minutes.
In a separate bowl beat egg whites until they hold stiff peaks. Beat whites and vanilla into sugar mixture until just combined.
Gently spoon this mixture into a large piping bag and start topping the cupcakes.
(To be honest, I think I only made half the recipe for this many cupcakes, but there's never any problem with too much marshmallow mix. See my marshmallow recipe for instructions on how to deal with the "leftover" if necessary. )
After cupcakes are topped, let them refrigerate for an hour or so until the marshmallow is set. It'll still be pretty sticky no matter how long you leave them for, so in the interest of not drying out your cupcakes, I recommend not leaving them in there too long. 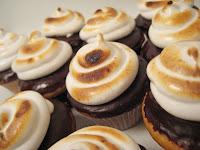 Now it's time for the torch. Be careful, have supervision, all those disclaimers, etc, etc, and try not to overly scorch the cupcakes. Or, I guess it really just depends on how you like your marshmallow. I was going for looks, so didn't let it get too burnt or mushy.
As I was saying earlier, I don't think I'm quite there yet. The graham cracker cupcake wasn't bad, but it didn't quite fulfill the role of graham cracker, likely because there was no crunch, but was also a little dry. As well, many people thought it needed a higher chocolate to cupcake/marshmallow ratio. No complaints on the marshmallow, as far as flavor, but I did find that in some instances, the marshmallow was not completely adhered to it's ganache partner, which was noticed mainly when you took a bite of the cupcake, and the marshmallow stuck to your lip, popping right off the cupcake.
So, there is more work to be done, but all in all, I'm moving in the right direction.
With that, I will say adieu to the summer of 2010, and with a clear conscience, I can eagerly move forward into the brimming and wondrous season of Autumn.
Posted by Unknown at 9:30 PM 0 comments 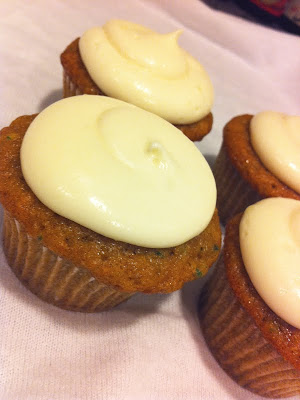 For me, summer is incomplete without home grown zucchini. Growing up, it was the dinner-time staple. Sadly, my mother wasn't aware of the many delicious ways that zucchini could be prepared, so too many of those summer dinners had a side helping of boiled and wilted zucchini. Luckily, zucchini had one saving grace, and that was in her amazing zucchini bread.

I have adapted the recipe I got from her slightly by adding some vanilla, omitting nuts, and turning it into a cupcake.

Beat together until smooth:
Gradually add:
and then: