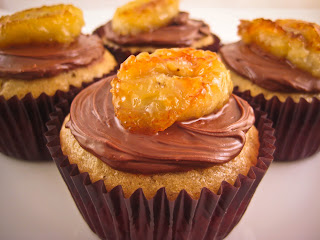 So, I missed the National Nutella Day this year (for shame), February 5th. So, in an effort to make it up to everyone, I did make a Nutella recipe, in the spirit of participation.

I have had this one one on my mind for a while. Now, I'm not super crazy about banana flavored things, but I do have exceptions for things like banana Nutella crepes, banana bread/cake, and fresh banana sliced over bran flakes. But, if I had to choose, anything smothered in Nutella would "take the cake," so to speak. I had originally thought that a Nutella/ganache topping would have been a nice elaboration on the theme, but honestly, the cream I recalled having in my fridge when I went to the store for other groceries was apparently a week past deadline. In the end though, I think topping these with straight Nutella was the way to go anyway. The caramelized banana on top is also deglazed with a dab of Frangelico, to keep the theme across the board.


Once cupcakes are cool, smother a generous dollop of Nutella on top of each. Next, make caramelized bananas (these instructions are pretty rough - your own judgement will be required for measurements):
Slice 1 banana into 12 thick slices. In a small frying pan, melt a tablespoon or so of butter. Fry banana slices for 1-2 minutes each side, then sprinkle with a tablespoon or so of brown sugar. Swish it around a bit and let the banana brown a bit, then drizzle a tablespoon or so of Frangelico over them. Flip them until nicely browned on both sides and swimming in syrup. Place one banana slice carefully on top of each cupcake. Be careful when transplanting, as the bananas will fall apart after being cooked.
Happy belated Nutella day!
Posted by Unknown at 9:42 PM 1 comments