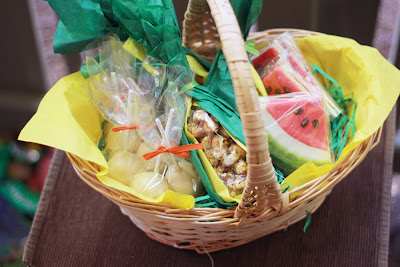 Welcome to Summer! I made another seasonal basket for the occasion. It was filled with orange 'n' cream cake pops, watermelon shaped sugar cookies, and my favorite: caramel corn-on-the-cob baggies. 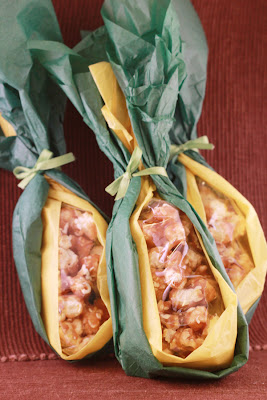 Once you've made the caramel popcorn (recipe to follow), to package them, I had some small narrow bags that I filled a little bit of popcorn into, then twist-tied off at the top. I then took a strip of yellow tissue paper and another, larger strip of green tissue paper and wrapped them around the baggies, covering the backs, but leaving the fronts exposed, and twisting them at the top to look like little ears of corn. I tied them off with a little bow, but there might be a more elegant solution to keep the corn look about them.

Coat a rimmed baking sheet with cooking spray. Heat oil in a large pot over medium-high heat until hot but not smoking. Add popcorn, and cover. Cook, shaking pot frequently, until corn has finished popping. Transfer to a large bowl. (Or use a whirly pop. Amazing!)

Heat butter, brown sugar, corn syrup, and salt in a saucepan over medium-high heat, stirring until sugar has dissolved and butter has melted. Clip a candy thermometer to side of pan, and cook until mixture reaches 290˚. Remove from heat, and stir in vanilla and baking soda.

Drizzle syrup evenly over popcorn, and toss to coat (this is harder than it sounds as you have to race the clock before the candy hardens. I found it was great to have a friend help me - I poured and she tossed with 2 large spoons. Be careful not to touch the molten liquid candy, too). Spread popcorn on prepared baking sheet, and sprinkle with sea salt. Let cool completely, then separate popcorn into pieces. Popcorn can be stored in airtight containers for up to 3 days (how could it even last 3 days? The stuff is so addicting!). 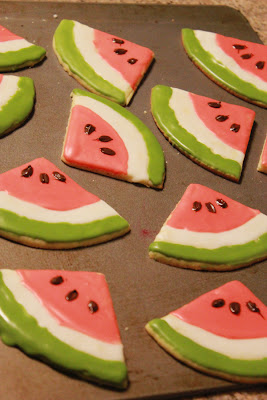 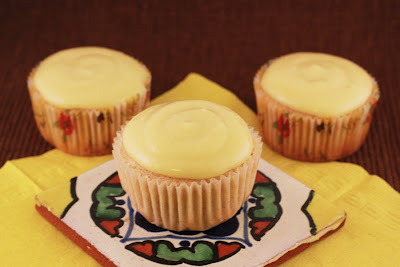 Horchata, a delightful Mexican beverage made from sweetened rice milk and spiced with cinnamon, has been a favorite of mine since I first discovered it at 11 years of age. My friend Tracy and I had a mix that we would blend up and sip on for hours. Later, I discovered that mixes were nothing compared the goodness of a real home made horchata, and have never looked back since.

Horchata is typically made by soaking white rice in cinnamon stick spiced water for hours, then draining out just the "rice milk" and adding sugar and vanilla to it until just right. Seductively simple, just requires a little fore thought, with the soaking.

The other side of this is that I've been playing around a lot with recipes that bend to certain dietary restrictions. A long time ago, I had been playing around with mochi cupcakes, which was a fun fusion of a Japanese dessert I had come to love, and my already beloved cupcake. The recipe I was working from called for Mochiko rice flour. Rice flour, although sometimes falsely advertised as "glutinous rice flour" does not actually contain gluten. Starch, yes, but not gluten. As to how it hadn't occurred to me sooner that this was the perfect medium to build another rice based dessert from, we will never know. 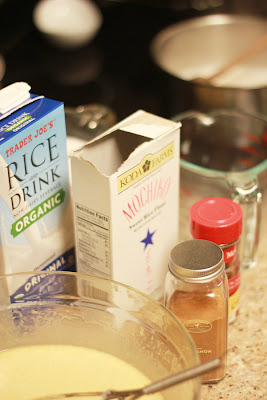 I, however, short-sightedly mis-remembered one of the ingredients to this cupcake recipe, so ended up doing my usual on the spot, bake-time experimentation to ward off yet another trip to the store for just one silly can of evaporated milk. Therefore, my new recipe calls for a homemade version of this kitchen staple, with a ricey twist. Also, topped with a rice milk pudding frosting, which is probably more like a custard actually. Best not make these on a really hot day, as the frosting would probably weep right off.


In a small bowl, whisk together sugar, cornstarch, salt eggs and 1/4 cup of rice milk. In a medium sized sauce pan, heat remaining rice milk and cinnamon stick and let simmer for a few minutes. Don't let milk reduce by more than 1/2 cup. Remove cinnamon stick and slowly pour some of the warm milk over the egg mixture, whisking steadily until it begins to incorporate, then return pot to stove and pour the egg mixture into the milk. Bring to a boil, whisking constantly (pudding will thicken quickly and look chunky unless you whisk very heartily). Once pudding is thick and coats the back of a wooden spoon, remove from heat and pour into a clean bowl. This pudding will make a very thick skin, which normally is fine, but we're going to be turning it into a frosting, so best to cover tightly with saran wrap and refrigerate until needed.

First, in a small sauce pan, heat rice milk over medium heat until reduced to 12 ounces. Don't let it boil. It will take about 10 minutes or so.

In the meantime, in a large bowl whisk together mochiko, baking powder, and cinnamon, and set aside.

In a medium bowl, mix butter with sugar, then one by one, mix in the eggs, whisking until incorporated. Whisk in vanilla. Once the rice milk has reduced to 12 ounces, slowly whisk into butter mixture. Gradually pour butter mixture over mochiko, incorporating them together as you pour.

Fill cupcake tins with batter and bake for 20 minutes or until edges begin to brown. Let cool.


Once both parts are cooled complete, then fill a pastry bag with your pudding frosting (it will be thick, but runny, so be prepared to make a mess), and pipe a dollop of pudding onto each cupcake. Sprinkle with a dash of cinnamon sugar if you'd like.

I normally don't condone refrigeration for cupcakes since most of the time they're better off without it, but since these have the more volatile pudding frosting, I would recommend keeping them chilled. The pudding will form a skin if exposed, so if you have a tupperware, that is probably the better method for keeping these stored freshly (and does sort of taste more like its refreshing iced beverage counterpart anyway).

Best solution, of course, is just to eat them. 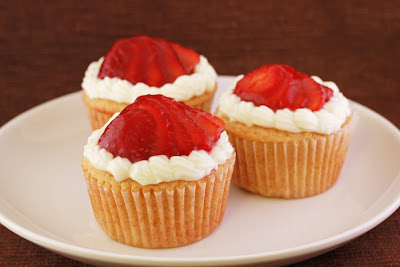 I never cease to be amused by transforming things into cupcake flavors. I am actually rather backlogged in showing off some of the things I baked lately, but long story short, I made a cupcake a couple weeks ago that was an homage to cheesecake, and it made me think that it could really go one step further.
Utilizing the always dependable Smitten Kitchen's epic recipe stash, I incorporated her black bottom cupcake cream cheese filling (with some adaptation) into a honey and graham flour cupcake base, and then topped with freshly sliced strawberries and a homemade strawberry glaze, with a decorative cream cheese frosting border (intended to add structural support in case the glaze decided to get slippery). I am happy to report that everything seemed to work out swimmingly, even for a first experimental try. Love it when that happens.

Preheat over to 350˚. Line baking tins. This recipe should make just over a dozen regular sized cupcakes.
Whisk together flours, baking powder, and salt in a small bowl. Set aside.
With electric mixer on high, beat butter and brown sugar until fluffy. Add in honey until incorporated, followed by eggs. Beat until the point of being fluffy again, then turn mixer down low and in batches, mix in flour and then milk until incorporated. Do not over mix.
Dollop mix into cupcake tins to just about half full (aren't we so optimistic). Set aside while making cream cheese filling.

Dollop a spoonful of filling into the cake battered cupcake tins. Since the batter is actually kind of thick, I took a spoon and sort of hollowed out the inside of each cup before adding the cream cheese filling. I think it helped keep the filling mor or less in the middle versus resulting in being a top layer of the cupcake. 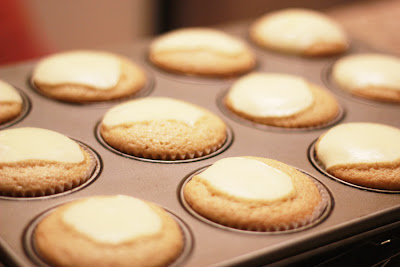 Cupcakes and filling will rise very nicely, but will fall a little when you take out of the oven. The filling may seem a little giggly while it's still warm, but once they get to room temperature, everything solidifies nicely. Sort of a typical cheese cake reaction, so don't freak out and over bake them.

Strawberry Glaze
So I happened to have about a half a cup of strawberry puree in my freezer from some previous strawberry project, so used that. If I had to guess, I'd say it was about the equivalent of a dozen large strawberries. Maybe 6-8oz. Give or take. To it, I added some undetermined amount of water... let's say 1/2 a cup, and 1/3 cup of sugar. I let that boil until it started foaming up, then strained out the chunks and seeds and put back over low heat and added a surrey of about 1 tablespoon water and 2 teaspoons of cornstarch. Once that started boiling again, I just whisked it all together to make sure it was incorporated and removed from the heat and let set for a couple minutes.  Should coat the back of a wooden spoon easily. And yes, another case of having too much glaze for the number of cupcakes I made. This made a lot of glaze... Enough for maybe 3-4 dozen cupcakes. I will find out how well it freezes and report back in a few months.

Cream Cheese Frosting
This (again) will make way more frosting than you need for this project, but I'm sure you can think of other things to do with leftover cream cheese frosting. You own a spoon, right?
- 8 oz cream cheese
- 8 oz butter, room temperature
- 3 cups powdered sugar
- 1 tsp vanilla
Beat cream cheese and butter together until smooth. 1 cup at a time, add in powdered sugar until mix is fluffy. Add in vanilla and continue to beat (scraping down the sides as needed), until the whole thing is fluffy and elastic. 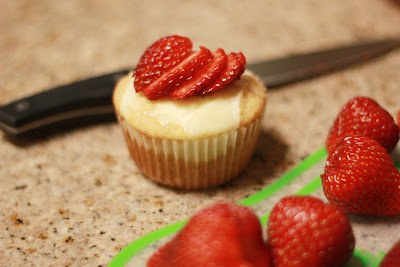 Once things have cooled down a bit, gently wash off as many strawberries as there are cupcakes (1 per cupcake for medium sized berries - if they are particularly large, 1 strawberry can top 2 cupcakes). When presenting berries, I typically don't drown them under running water, but instead dab them with a moist paper towel to clean them. Otherwise, I guess you could rinse them off earlier in the process so they're are dry again once you're ready to slice them - basically, you just don't need a bunch of excess water ruining your set up at this point.

You then top each cupcake with a splayed strawberry, then using a pastry brush, dollop and spread glaze over it. 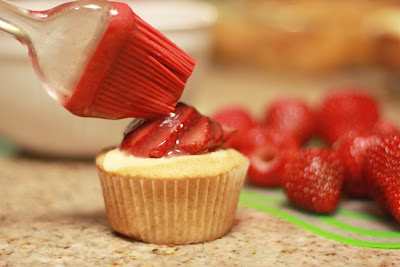 With a small tip on a pastry bag, pipe frosting around edges. You can be as decorative as you please, my only goal was to encase the strawberries in an attempt to contain them. The glaze wasn't runny though, so in the end, the frosting ended up being purely decorative (oh, and tasty).
Posted by Unknown at 7:00 AM 0 comments