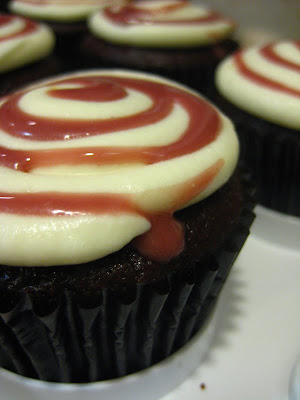 A commissioned cupcake: Red Wine. We brainstormed out how to make this flavor cupcake, and this is what we came up with:

Chocolate cupcake with Zinfandel cream filling, topped with Brie-cream cheese frosting and a drizzle of Zinfandel reduction glaze. It was quite an amazing combination, and definitely a multi-step process.

First, I reduced a couple cups of the Zinfandel so it was more concentrated in flavor. I'd say, turn 2 cups into 1 and you'll have a good amount to work with. You'll need this for the drizzle on top, but also for dipping the cupcake into before you add the filling.

Second, I made the zinfandel cream filling. Using a basic Bavarian cream recipe, I replaced the water with wine and reduced the amount of whip cream needed by about half. Unfortunately, this was REALLY good - so good, I kept having to taste it... you know, to make SURE it was good. Luckily I still had enough (more than enough) left to fill 15 or so cupcakes.

Zinfandel Cream:
In a small bowl, set 1 tbs gelatin in 1/4 c wine (supposed to be cold, but mine was room temp). Let set for at least 10 minutes. In a separate bowl, cream 2 egg yolks, 1/4 C sugar and a pinch of salt. In a saucepan, bring to a boil 1 cup milk and 1 tsp vanilla. Once it has reached a boil, remove from heat. Temper egg solution by scooping about 1/4 C of the milk and whisking it quickly into the egg. Once tempered, slowly pour all egg mixture into the milk and whisk until combined. Whisk in gelatin mixture. Strain, then let cool. Whip in 1/2 C whipped cream once it is set.

Next phase of prep was the brie cream cheese frosting. So, I didn't take the most precise measurements when doing this, but I think I used about 1 cup of brie, 1 8 oz bar of cream cheese and 1/4 C of butter. Whipped those up with about 1 - 1 1/2 cups of powdered sugar, a tablespoon or so of honey, and was happy with the consistency. You can add more sugar, but I felt like it would be better a little more savory. I did trim most of the rind off the brie before mixing it up, but might actually let more of it slip in if I did it next time because it does add that distinctly brie flavor. Just make sure to crumble it finely because chunks of rind will look funny in your frosting.

Last prep, make the reduction glaze by setting aside about 1/4 cup of the reduction and whisking powdered sugar into it until desired consistency. 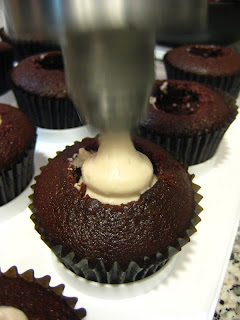 Ok, now you're ready to make cupcakes. I used my basic Devil's food cake recipe as the base of this flavor combo. Once cooled, I scooped out the centers with a melon baller (and tried not to gobble all the discarded cupcake holes up in one bite!). Then dipped all the cupcakes in the remaining reduction and used a pastry brush to get some in on the inside of the cupcake orifices. Then I used my fancy schmancy pastry gun to fill the cupcakes with the Zinfandel cream. Try not to overfill.

Then I piped little swirls of the brie-cream cheese frosting on top of each cupcake, followed by a swirled drizzle of the reduction glaze. 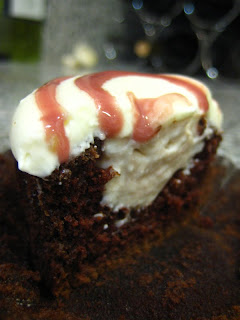 The overall flavor was not too sweet, creamy, and with a kick of wine flavoring that was super satisfying. And it made a pretty cross section too!

Words of improvement might include using a reduction to set the gelatin, that way the cream has an even more potent wine flavor. Once you add all the other cream ingredients, it gets a little over-powered.
Also, the reduction drizzle didn't stay pretty the whole time. It never quite hardened, so the top half and the bottom half of each line got misshapen. I am not 100% sure what my solution is, but it would probably be a cooked glaze. Only experimentation will tell though.

Also, unlike most cupcakes I make, I felt these ones need to be refrigerated due to the high dairy content and the gelatin.

And please, don't eat these cupcakes and drive ;)
Posted by Unknown at 11:14 PM 5 comments