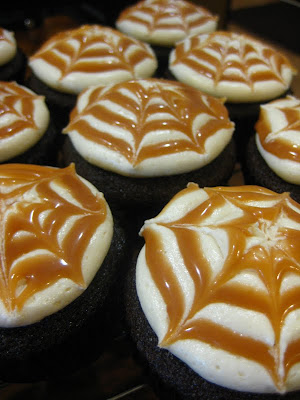 This week I did a festive chocolate cupcake with caramel buttercream and caramel swirl topping, with a little spiderweb style.

The caramel sauce turned out quite tasty. I followed a food network recipe from the Barefoot Contessa, Ina Garten. It was nice because it didn't require candy thermometers.

Mix the water and sugar in a large heavy-bottomed saucepan. Cook over low heat until the sugar dissolves. Increase the heat and boil uncovered until the sugar turns a medium brown, about 5 to 7 minutes, stirring occasionally with a wooden spoon. Watch it carefully at the end, as it will go from caramel to burnt very quickly. Stand back to avoid splattering, and gradually add the cream and vanilla extract. Simmer until the caramel dissolves and the sauce is smooth and thick, about 2 minutes. Serve warm, or add another 1/4 cup of heavy cream and serve room temperature.

Just a note, don't try and make a smaller batch. I did the other week, and it became an overheated mess of stringy caramel and chunks. Not very appealing. Other than that, the 1/4 cup of cream after it's been removed from the heat is also important for keeping it from crystalizing too much.

Ok, so I took my Devil's food cake recipe and experimented with a couple of the cupcakes by putting a dollop of the caramel sauce in the middle of them before baking. Results varied. Most of the cupcakes reacted by getting a gaping hole in the center/bottom of the cupcake and leaving a crispy sugar crust on the wrapper where it decided to go when baked. From what I heard, it did make those cupcakes extra moist, but am not sure it was worth it due to the fact it left some parts hard to eat or... empty.

So, I just kept the rest of it straight-forward and made an easy caramel buttercream with the sauce.

Beat butter until smooth and add powdered sugar 1 cup at a time until frosting is thick and almost crumbly. Add caramel sauce a little bit at time until you reach the desired consistency. I did add a little cream (you could use milk) to help smooth it out a bit too.

Warning, it's very sweet. I'm sure this would go well as a cream cheese frosting too, to cut down on the sugar content a bit. 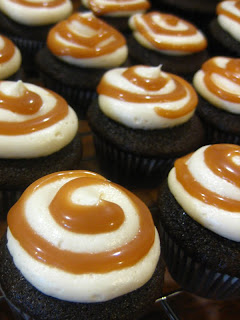 After I piped the buttercream on the cupcakes, I took a pastry bag with a small round attachment and filled it with the remaining caramel sauce, swirling it on top of the cupcakes. Then with a toothpick, I pulled the frosting and caramel down in little spiderweb like trails from the center of each cupcake, achieving the desired effect.

Yay Halloween!
Posted by Unknown at 9:38 AM 0 comments 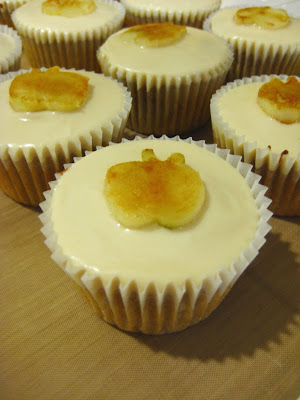 This time it's tasty Apple Cider Cupcakes with a delectable spicy cream cheese glaze and apple cutout. My friend Kristy sent me this recipe a year ago and I made it then, before I really jumped on the cupcake bandwagon. They were SO delicious and I remembered them a year later just as I saw the apple cider hitting the supermarket aisles.

I did do a little research on some other apple cider cupcake recipes posted online, and I modified the original slightly and was very please with the results. There's really nothing better, in my opinion, than having a spicy cupcake loaded with chunks of juicy apples. I also liked having the apple cider reduction ready to go for the cupcakes as well as the frosting. It really intensified the flavor. I actually used Trader Joe's "spicy cider" which already has a lot of flavor in it.


Preheat oven to 350˚. Grease or line 12-16 cupcake wells. In large bowl, cream together butter and sugar. Add eggs, beat well. Combine the baking powder, cinnamon and salt to the flour and add to the butter mixture alternately with the apple cider until thoroughly combined. Mix in apple chunks. Pour into prepared cupcake pan, filling each cup 3/4 way full. Bake 20 minutes or until the tops spring back when lightly touched.

Put the apple cider in a small pan and bring to a boil over high heat. Continue to boil until the cider is reduced to about 2 tablespoons (it will be slightly syrupy). Set aside to cool completely.

** I read a recipe online that suggested using 2-3 cups of cider and boiling it down to the approximately 1 cup you'd need for the the cupcakes. If you have enough time ahead, I recommend it because it really packs in a whole lot more flavor. And you can just make enough for the frosting at the same time while you're at it. 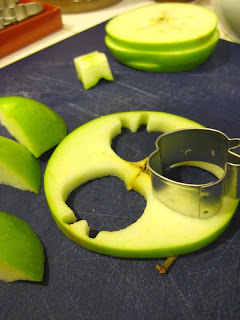 My little added touch was the apple cutout on top. I took a granny smith and used a handy little apple shaped cookie cutter that happened to be the right size, and was able to pop out the shapes from the apple slices. I actually just used the remnants of that apple as the chunks in the cake, which worked out to be about half an apple's worth. I recommend peeling the apple before hand though, something I didn't do.

While I made the cupcakes, I let the apple shapes rest in a bowl of water with a splash of lemon in it to keep them from browning. When the cupcakes were done and cooling, I pan fried the slices with a touch of butter and cinnamon and let them go until they were slightly browned, but not mushy. I did lose a couple in the process, so it's best to have a couple more than you think you'll need.

When the cupcakes were cooled, I made the frosting. It was pretty runny because I was trying to pack in a lot of flavor with the cider syrup, but it was good. I frosted and then placed a nicely browned apple slice on the tops of each of them. Make sure your apple slices have had a chance to cool though, because they will slide around on the cream cheese frosting and melt it if they're not. 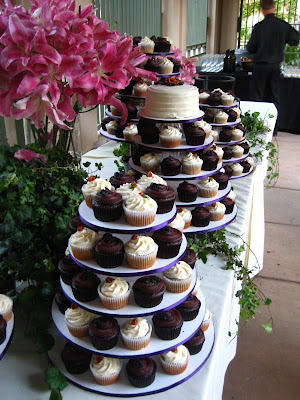 So, I'm a little delayed in getting these posts complete, but I've been pretty busy in the kitchen and really want to share some of the adventures!

Mainly, I had the pleasure of baking cupcakes for my friends' wedding this September. It was a beautiful wedding down in Pasadena at the CalTech campus where they both went to school.

As Pasadena is nearly a whole state away from me, I had to migrate my kitchen for the weekend in order to accomplish the cupcakes. Transplanting all my tools into the Avery dorm kitchen for a couple days was not as incredible of an undertaking as I imagined, but still quite a hefty chore. I was really grateful that the few kids who were roaming the dormitory halls were very courteous and respectful of me in their space, especially as my cupcakes overwhelmed their common areas, and that the ominous emails the bride-to-be sent to them before my arrival (relating to missing cupcakes) were dutifully noted. I'm not sure how many dorms you could get away with leaving 250 cupcakes lying around overnight without there being some kind of cupcake massacre. 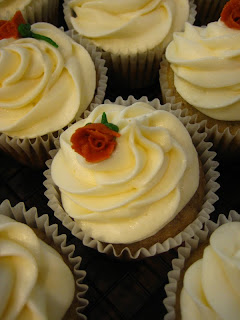 In any case, the task was 125 Banana cupcakes with cream cheese frosting, and 125 Chocolate cupcakes with semi-sweet ganache frosting. I was able to prep a few things beforehand, and did some last minute supply shopping, but mainly just dove right in hoping I'd calculated the quantity of my ingredients correctly. And there were some issues. For example, I had figured I'd need 16 pounds of butter when it was all said and done, but really ended up only using about 10 or 12 pounds. I had to buy 2 more bananas because 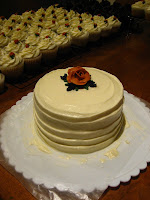 I had not calculated in the mini-cake I was making (so they'd have a little something to cut into). But overall I was quite pleased with how close I came to my guesses... er... calculations.

So the baking went very smoothly and all the cupcakes were cooled and frosted by 10 or 11 the night before the wedding. The kicker was the little decorations I made on them. Having finished a class in cake decorating, I was feeling pretty good about my buttercream roses, so decided to put a mini one on top of each cupcake. 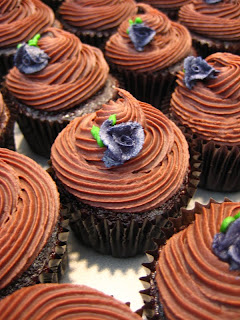 The wedding colors were burnt orange and eggplant purple. So, I thought the orange would look lovely on top of the cream cheese frosting and the purple would go well with the rich chocolatey brown of the ganache. And yeah, I think they did come out looking rather cute. But oh my god did my hand cramp like nothing else! That is a muscle I have yet to develop. 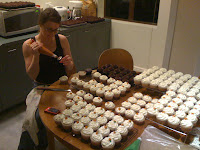 So after 3 hours of gently piping one little rose onto my fancy little rose-making spinny-pin, then gently transferring each one to the top of a cupcake and repeating that process until I had a full tray or so of them, then piping on a little stem and leaves to each one of those little rose buds... then, after 250 of those I was able to call it quits. It was that moment I realized using a mouse at work was not going to be the reason why I get carpel tunnel!

But was it worth it? Yeah, I think so. Everyone seemed to really enjoy the cupcakes, and the little girls in their cute little pink dresses at the wedding were in so much awe about them, they had to have been good!
Posted by Unknown at 12:21 AM 0 comments 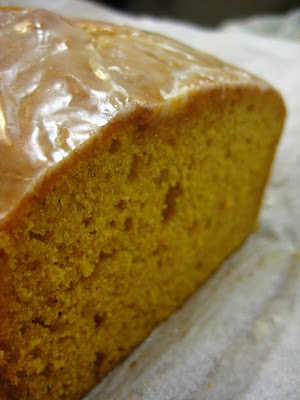 It's that time of year! I love the fall and all the wonderful flavors it has to offer. I especially adore pumpkins and all the delightful treats you can make with them - sweet and savory. I just love the fall spices and the way they make your home smell when you have something tasty baking in the oven.

To bring in the season properly, I have to bake this notoriously good pumpkin bread recipe that I got, no joke, from my high school cooking class. Luckily, my teacher didn't say it was patented or copyright, so I'm happy to pass it along.

I've tried this with freshly made pumpkin puree, canned, organic, non-organic, you name it, and it's always good. I unfortunately didn't find the quality between fresh and canned pumpkin to be worth the effort of steaming/roasting it myself, so have to go against my desire to make everything from scratch and say it's canned pumpkin all the way for this recipe.

Preheat to 350˚
1. Prep baking pans:
2. Whisk together dry ingredients in large bowl and make a well in the center:


4. Add liquid ingredients to the well mix and stir/whisk together until combined.
5. Pour into preferred baking tin(s).
6. Bake recommended times based on pan size. Check doneness with a toothpick. Done when pick comes out clean and the tops are lightly browned.

Cinnamon Sugar:
Before baking, sprinkle a mix of 2 tbs sugar and 1 tsp cinnamon over the top of the bread for a crispy baked topping.

Orange Glaze:
After baking (either while warm or when cooled), drizzle a mix of ½ cup powdered sugar and 1-½ tbs orange juice over the bread and allow it to cool.

I definitely recommend and prefer the orange glaze. I really like the cinnamon sugar topping on other breads, such as zucchini, but you really can't go wrong with something like that. 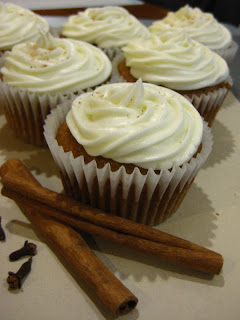 I find this recipe to be stupendously reliable, moist, flavorful, incredibly easy and fast to make, and versatile - you can make it into cupcakes by simply adding cream cheese frosting! Which, on that note, is October's cupcake of the month.
Posted by Unknown at 11:16 PM 1 comments