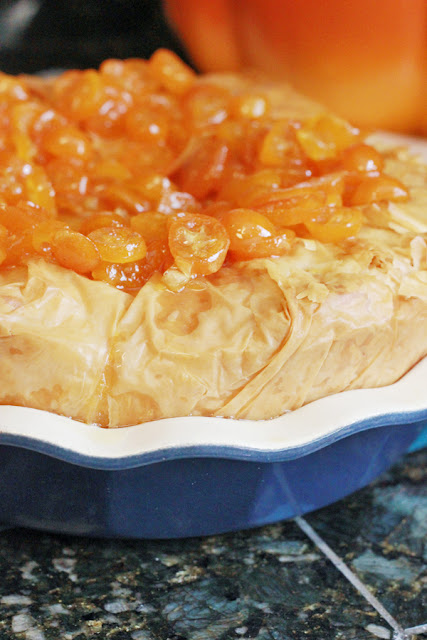 This was my back up plan for Easter brunch.

See, I had made this wonderful Greek Custard Pie, a la Brown Eyed Baker on Thursday night, and packed it up to bring down with me to L.A. on Friday. I subsequently left both it and the Spanakopita I had made in the fridge at work, only realizing I had forgotten them after having driven about 150 miles.  I never even got to taste it, but my friend (who was still in the Bay Area and had access to my work's fridge) whom I pawned it off on said it was delicious. *sigh*

I wasn't quite able to pull it together for a remake on Saturday once I had arrived in L.A., but had to come up with something to replace it. I liked the idea of wrapping something in phyllo, and the orange zest that was in the other recipe sounded like a nice touch. But I'd already done something with plain ol' orange, so, why not kumquats instead? And whipping up a cheesecake is a pretty harmless venture, especially if you're wrapping it (therefore not worrying about it looking ugly when it cracks on the top because you're too lazy to put it in a water bath to bake it). 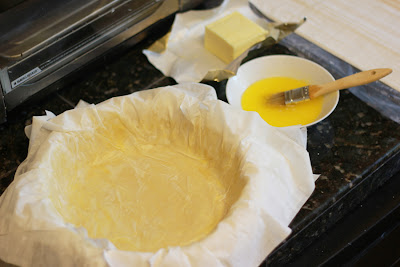 One more challenge I proposed was to make it slightly less fattening. Slightly. I'm not all that familiar with how non-fat and low-fat dairy products work in baked recipes, but I figured that so long as I was covering it in citrus and phyllo, that it could mask yet another uncharacteristic attribute of my non-conventional cheesecake.

So, I looked up an old favorite cheesecake recipe of mine that is the cream cheese and sour cream type. I bought low fat cream cheese (couldn't find Neufchâtel when I went to the store), and non-fat sour cream. I didn't skimp on the butter that I layered the phyllo dough with, so you know, it probably balanced out.

Honey Cheesecake
Adapted from Allrecipes
(measurement disclaimer: I was working in a friend's kitchen and never did find the measuring cups, so I just eyeballed the sugar. It came out fine... who said baking was a precise science anyway).

Cream cream cheese until smooth. Add in sugar and honey and blend until smooth. Add in the cornstarch, vanilla and salt, then the sour cream. Once that is smooth, crack one egg at a time into the mixture until each one is completely mixed in before moving on to the next. Set aside until ready to fill crust.

Preheat oven to 350˚. Place a sheet of aluminum foil on the rack below the one you will put the pie pan on, just in case butter or cheese cake spills out while baking.

Melt butter in a small dish and, using a pastry brush, begin to smother a deep dish pie pan (or whatever you want to bake this in) with butter, and continue to brush each layer of phyllo generously with butter until you've used up all the sheets. The edges of the phyllo will dry out quickly, so as soon as you've prepped the bowl, pour the batter into the dish and begin to butter and layer the phyllo edges back over the cheesecake until those are all accounted for. You should have overlap, and make sure the seals are pretty tight. I didn't have any issues with leakage, but I suspect you could if your dough is cracking before you can get the butter on it. 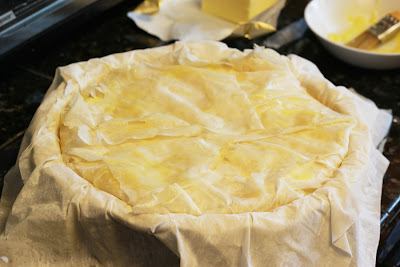 Pop into the oven for about an hour (check it at 45 minutes or so). Be careful the phyllo doesn't burn, but you do want it nice and brown on top. One thing I didn't expect was the rise. I suppose I should know better from making cheese cakes before, but this was impressive. You can see from the photo up top that the cheesecake batter was mostly level with the rim of the dish when I put it in the oven, but the post baking rim is well over an inch higher than the level of the dish. Impressive! I was pretty afraid this was going to cause problems, but like I said, it never did crack or leak. 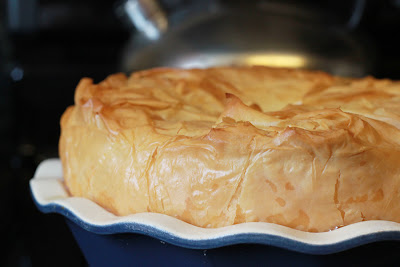 My "check" for doneness was by the golden top of the phyllo, and when I shook the pan, there was no giggle. I let it sit at room temperature for about 8 hours before I put it in the fridge to chill over night.

So, while it's cooling, make some candied kumquats. I've never eaten a kumquat before, much less baked with one, so this was a gamble. They just look so darn cute, and they smell good, so why not give them a go. 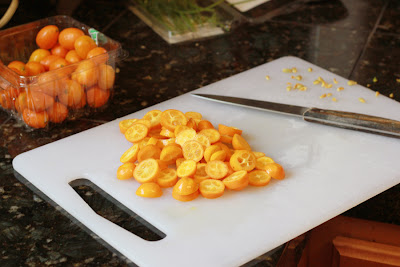 Boil all together until the water is reduced and the mix is syrupy. I just let it go for a while... probably 20 minutes or so. Let it cool a bit while your cheesecake bakes, then pour it over the whole thing once it's out of the oven. 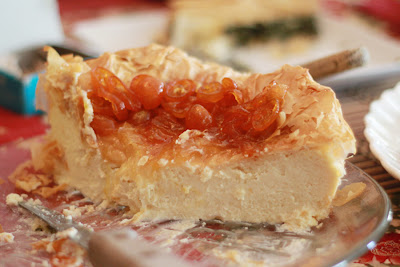 There weren't any leftovers, so I'd say it came out alright. Honestly, the kumquats were really nice. They had a pretty distinct flavor that was almost akin to Japanese yuzu, which I found very pleasantly surprising. If they didn't have so many seeds, I'd bake with them all the time!

In any case, I'm sure if you were on a mission to find a lower-fat cheesecake option, this variation (minus the oodles of butter in the crust) is a good option. I'd be curious what other people might come up with to kick it up a notch.
Posted by Unknown at 7:10 PM 0 comments 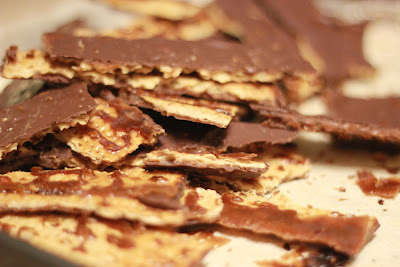 You know you don't live in New York when you struggle to find matzoh at the grocery store 2 days before Passover. That wasn't about to hold me back from getting a hold of some just so I could make these tasty, crunchy, buttery, caramelly morsels, now was it?

I am not sure who pointed me in the direction of this recipe in the first place, or if I happened upon it while perusing David Lebovitz's extensive blog, but I have made these before and recalled them being ridiculously easy, and ridiculously delicious so wanted another go at them.

Line a rimmed baking sheet with foil. Lay a sheet of parchment paper over the foil. 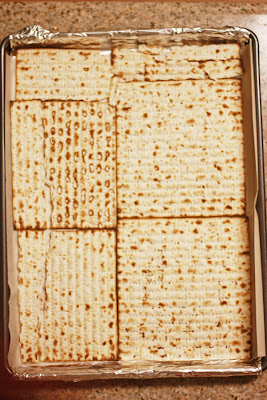 Line the bottom of the sheet with matzoh, breaking extra pieces as necessary to fill in any spaces. 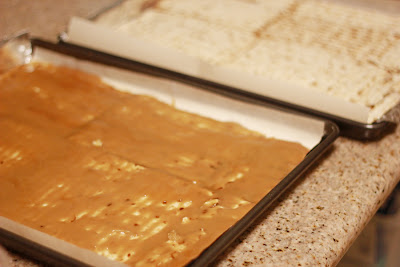 In a medium saucepan, melt the butter and brown sugar together, and cook over medium heat, stirring, until the butter is melted and the mixture is beginning to boil. Boil for 3 minutes, stirring constantly. Remove from heat, add the salt and vanilla, and pour over matzoh, spreading with a heatproof spatula. 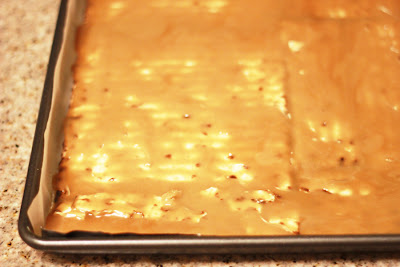 Remove from oven and immediately cover with chocolate chips. Let stand 5 minutes, then spread with an offset spatula (I only waited about 1 minute before spreading the chocolate - it was hot!).

Sprinkle with sea salt (or any other topping, of which David recommends a few).

Let cool completely, then break into pieces and store in an airtight container until ready to serve. It should keep well for about one week (if it lasts that long!)