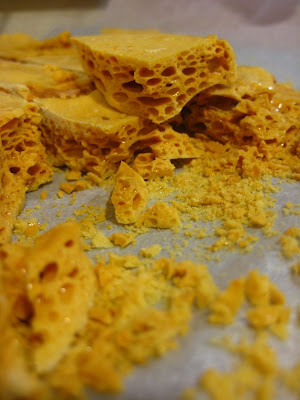 I first tried this candy while on a trip to Ireland. I had never even heard of it before, which is a shame, because it's quite the addicting little treat.

Knowing that I had never heard of it before, I assumed many of my American compatriots were in the same boat, so wanted to expand their horizons as mine had been. So I whipped up a batch of this relatively easy confection and brought it in to work. I was amazed at the response I got (mind you, my coworkers have all come to expect that there will be sweets of some kind adorning the front desk, unfortunately making my treats somewhat unspecial). But in this case, many people were coming back for 3rds and 4ths, and a number of people even knew what it was (!). One lady said she used to make it every day as a kid in Korea; it was her childhood favorite. So I don't know why American's were denied this experience, but hopefully we can work through that fault and embrace the crunchy, crispy deliciousness that is honeycomb for ever after. 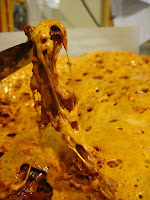 One note of caution: While on the stove, don't let the sugar mix go beyond 300 degrees. Luckily, the recipe is simple, easy, and fast, so failing in my first attempt was not terribly discouraging and continued to try it again. But the first batch was definitely burned and carmelized, which is not the correct texture or taste. Made for an awesome photo though.

So, the recipe is

Prep a cookie sheet or jelly roll pan with some parchment paper and set aside. In a medium sauce pan, bring the water, syrup and sugar to a simmer over medium heat and don't stir. Let it bubble its way up to 300 degrees fahrenheit (until the liquid is the color of light straw) and then immediately dump the baking soda into the pot. Whisk rapidly incorporating the soda into the sugar mixture as thoroughly as possible. The mixture will start bubbling up quite violently and turning the mix into a honey color. Pour the mix onto the parchment paper and let it rest for 20 minutes. Any fussing with it and the air bubbles will deflate and you will lose the quintessential "honeycomb" look that is caused by the soda forcing air throughout the toffee-like sugar mixture. The ideal outcome, is a very porous, crispy, sticks to your teeth texture that tastes something like butterfinger/caramel and melts in your mouth. There is a distinct baking soda taste to it too, but not in a disagreeable way. It's quite a delightful way to get your sugar fix. 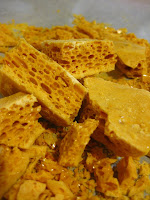 Once it is set, just chop it roughly with a sharp knife. I like to get sizeable pieces and then the little bites just happen because the candy is too brittle to cut into perfect shaped or sized pieces. You can also cover the pieces with chocolate, which is amazing. In fact, Cadbury has a chocolate covered Honeycomb bar that is commercially sold over there (why not here?!!!).

So from Great Britain (or wherever it originated) to you: enjoy!
Posted by Unknown at 11:16 AM 0 comments 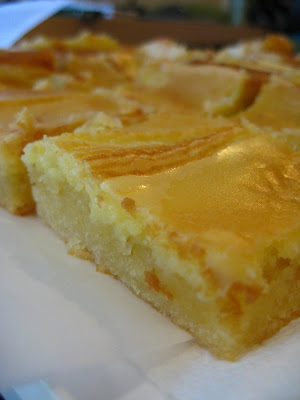 The idea was brought to me directly from St. Louis via my boyfriend's parents who were visiting over Memorial Day weekend. Having never heard of it, the name was a quick selling point. Apparently a very St. Louis kind of thing, I figured the west coast needed to be introduced (including myself) so ventured to try it.

Not sure if she was the founder of said Gooey Butter Cake or simply the one who made it popular, but it appears we have Paula Dean to thank for it. So saying, I believe the confection holds up to the Southerner stereotype that if it's going to be good, it's going to be clogging your arteries. Yum. Luckily it's pretty rich, so unlike some of those scorpion-style confections that you find you can eat tons of, but are extremely bad for you, this treat should and really can only be consumed in small portions.*

For experiment's sake, I made what you would consider half a batch. Please double at your own discretion.

So I started with a variation on yellow cake. My variation went something like this:

sift together and set aside:

Pour this mix into the bottom of a 9x13 pan (I line mine with parchment to keep things easier to clean/cut). You could also do a 9x9 with the final product being a bit taller (could be good).

Next, make the gooey:

Blend cream cheese until smooth. Add eggs and vanilla. Then add the sugar (I dare you not to make a mess of it) and make sure it's smooth. Then pour in the melted butter.

Pour that mixture over the cake batter evenly. I smoothed mine out and made pretty swirly designs which ended up being visible after baking, so I recommend it (if you care).

Bake for 30-40 minutes (and add more time if you double the recipe). But I guess this is where you just do what you think is best because if you insert a toothpick in the center, well... it's going to be gooey. So I just make sure the cake looked pretty well browned on top (where it was popping through the filling) and made sure it cooled completely before digging in.

I also tried one variation with chocolate cake and peanut butter gooey, but we ate it before it cooled so the photos would have been discouraging. They were adored by the consumers, nonetheless.

*That is totally an opinion. I'm sure there are those who would challenge my position. At their own risk, of course.
Posted by Unknown at 3:50 PM 0 comments