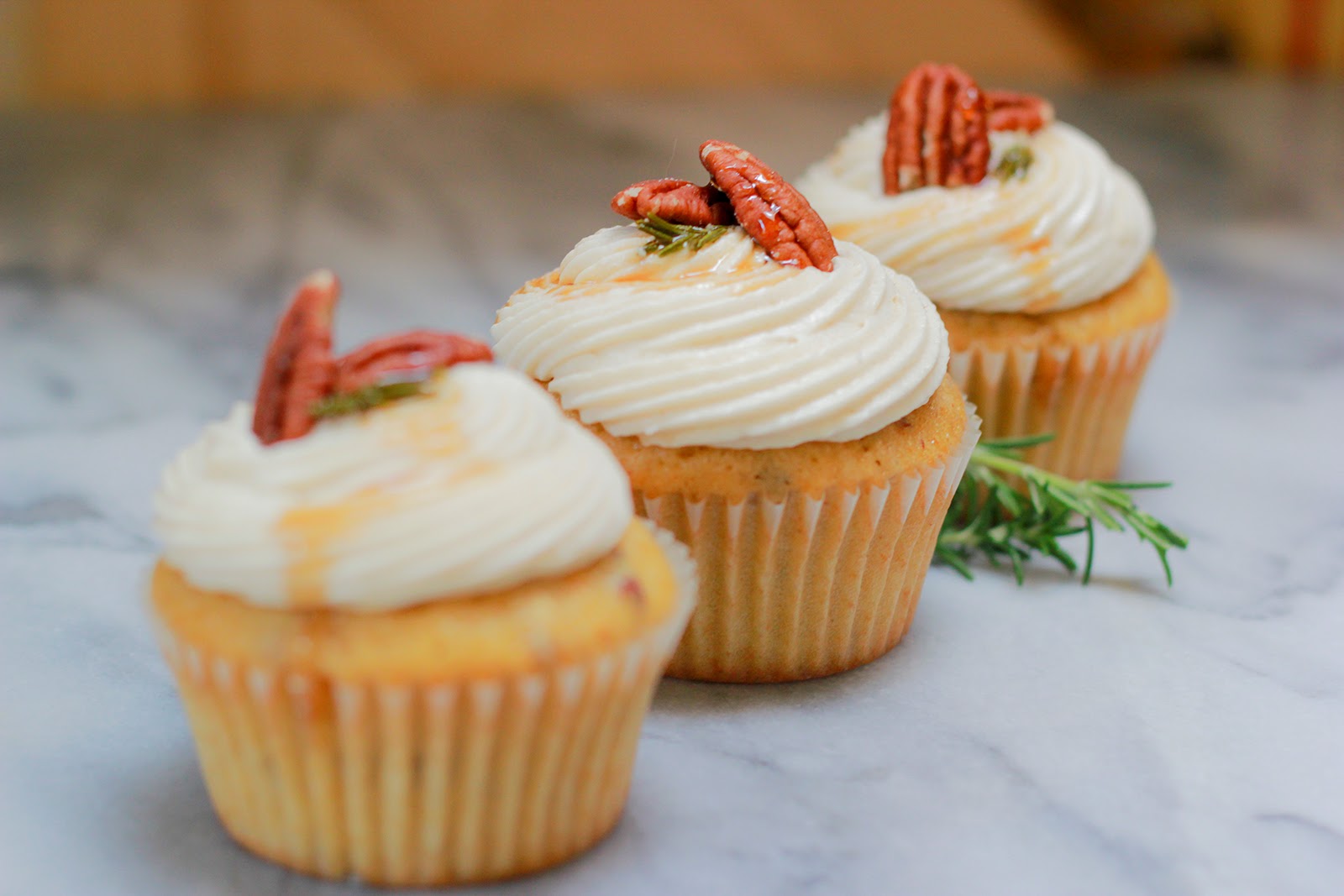 I didn't lie; I told you this year's theme was browned butter.

I have made browned butter cupcakes a few times this year, but my favorite iteration has to be the one with the rosemary infused maple syrup and toasted pecans. It was inspired by a very delicious ice cream I had at a lovely restaurant in Oakland. Vanilla ice cream studded with salty pecans and topped with this rosemary maple syrup drizzle. Outstanding combination of salty and sweet, and very rich. I thought it would work very well with a browned butter base, so turned it into cupcakes.

First off, toast a handful of raw pecans. Spray them very lightly with some oil and sprinkle with some kosher salt, roasting from anywhere between 200˚-300˚ for about 10 minutes or until you smell the nutty aroma. Don't burn them, so keep an eye, and toss them around halfway through if needed. Set aside to cool. 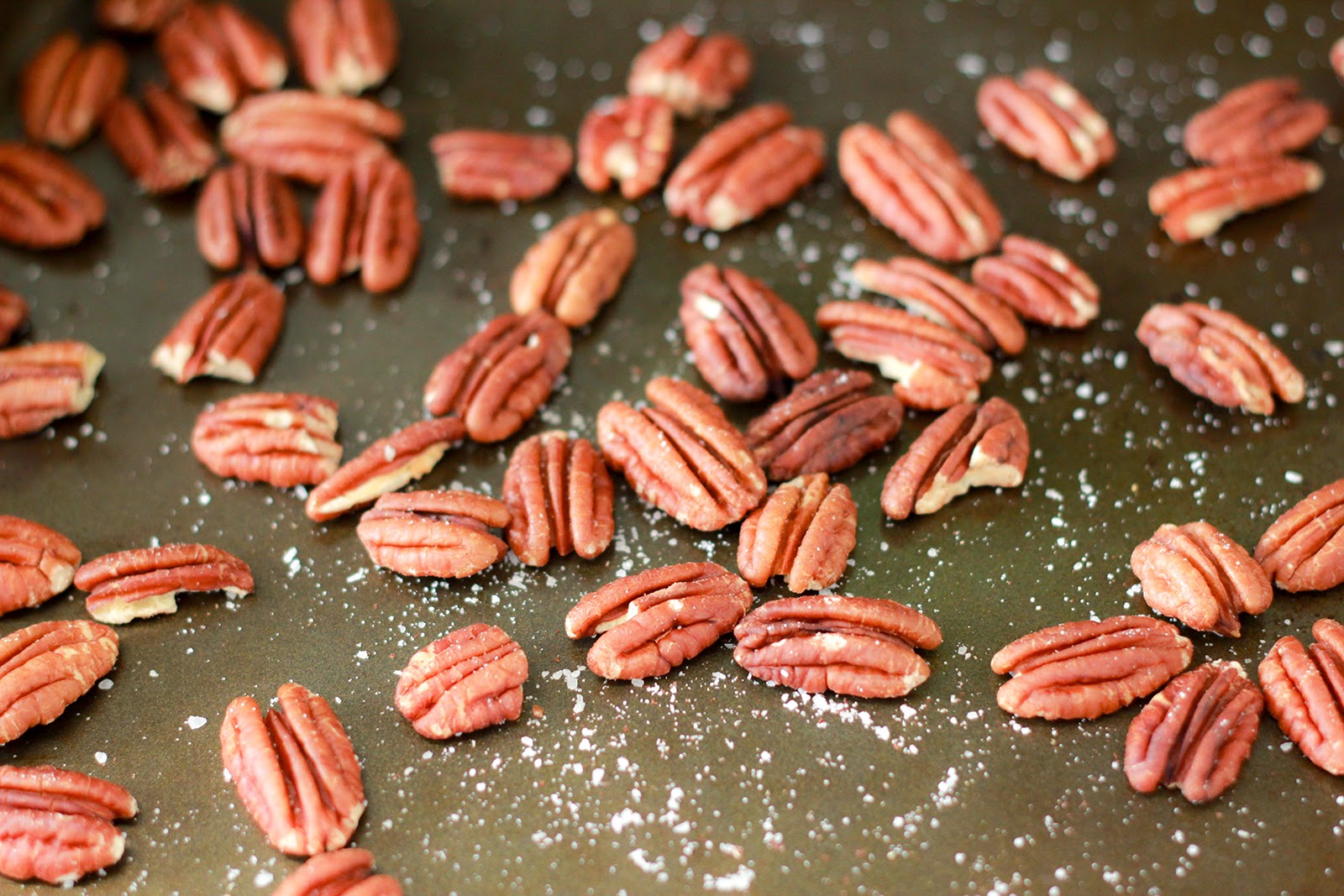 Then make a quick infusion of rosemary into maple syrup. I don't think I did a good job of measuring out how much syrup or rosemary I used here. Let's say 1/4-1/3 cup and a 4" piece of rosemary. I do recommend trimming the rosemary into small clusters first (versus sticking the whole stock in the syrup) so that you have small pieces to top each cupcake with. In a small pan, bring the syrup with rosemary in it to a boil, then remove from heat and let it steep until it's cooled off on its own. Oh, just in case it's not a given, you should only be using real maple syrup for this - not the fake stuff. 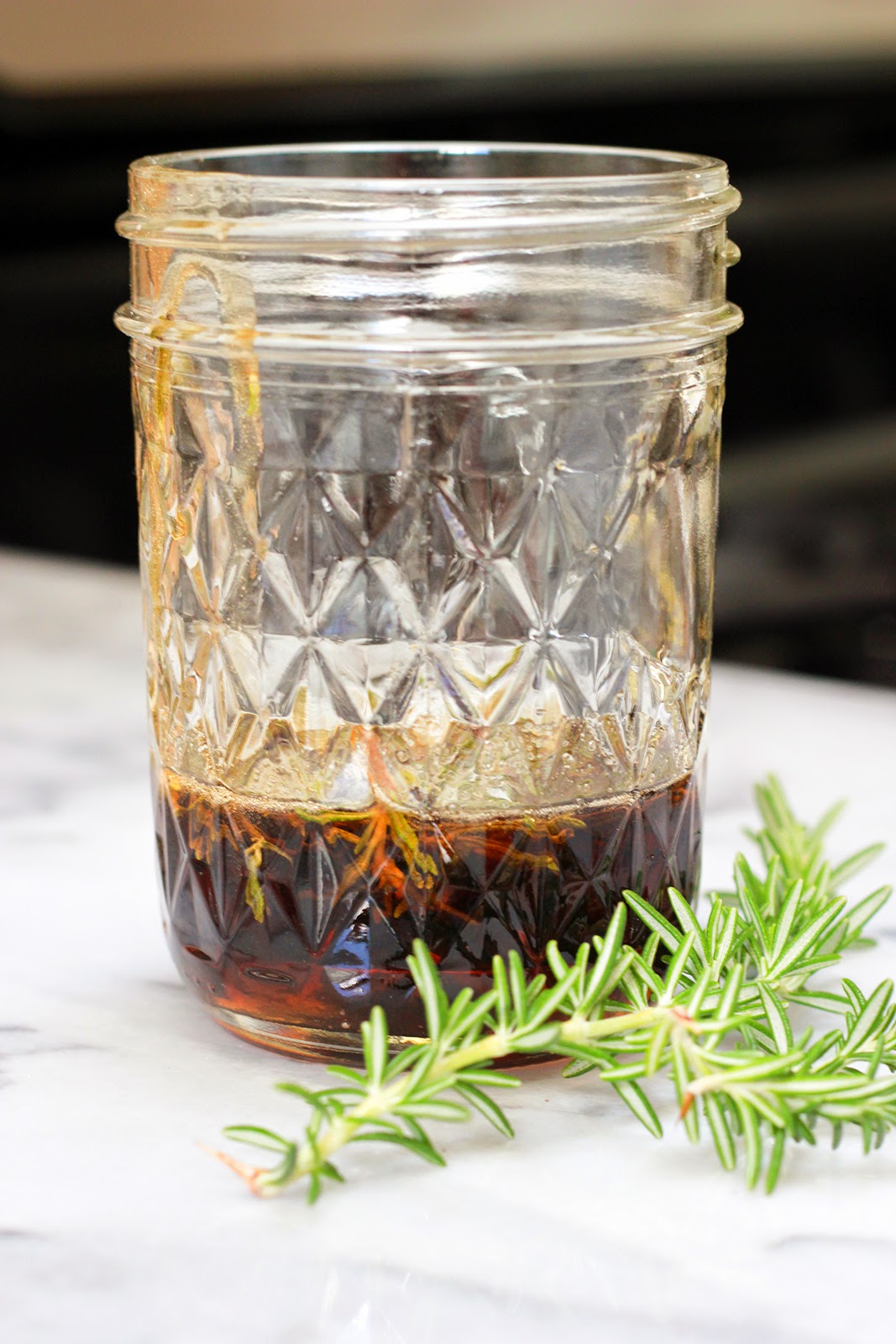 Next is the batter, starting with browning butter. In a medium size sauce pan, melt butter slowly over a low heat. Keep a close eye on it and stir frequently. The butter will probably try to boil or sizzle, so don't let it do that. Stir frequently, scraping up any bits from the bottom as you do. First it will foam up and be hard to see what's going on underneath the foaming. Then the foam will subside and you'll start to see little "bits" floating in the butter. That's the good stuff. Keep your eye on those bits and when they start getting to a caramel color and the aroma is nutty, remove from heat. This all takes between 5-10 minutes depending on how much butter you're browning, width of your pan, and how low your heat is.

Set that aside for a minute, and in a medium bowl whisk together your dry ingredients: flour, baking powder, and salt (and nuts if using in batter).

Mix brown sugar into the browned butter (in the sauce pan is fine), then quickly whisk in the eggs one at a time until combined. Add vanilla, then alternate adding the flour mixture with the milk (typically 1/3 flour, 1/2 milk, 1/3 flour, 1/2 milk, ending with remaining 1/3 of the flour). Try not to over mix.

Pour batter into prepared baking tins (1/4 per cupcake works great for me) and bake for 20 minutes.

Rosemary Maple Buttercream
Side note: I have found that 1 stick of butter to ~2 cups of powdered sugar is just enough frosting for a dozen cupcakes. Consider it a good rule of thumb if you decide to start experimenting. Likewise, you can gauge how many cupcakes you'll get out of recipe (roughly) by following the formula that with every 1 cup or so of flour in a recipe you'll get about a dozen cupcakes. Give or take. Anyway...

2 sticks butter, softened (1 cup)
3-4 cups powdered sugar (depending on your sweet tooth and the consistency of the frosting you like - more sugar = stiffer and will form a kind of crust once it's set for a while - great for making shapes/flowers, less sugar = less stiff and creamier.)
2-3 tbs of infused maple syrup
dash of kosher salt
1-2 tsp milk as needed

Whip butter, adding powdered sugar until blended. Drizzle in syrup and dash of salt and beat until it gets fluffy. Add a little milk to smooth out the consistency. You're now ready to decorate.

Another side note: I didn't do it with this recipe, but if you're REALLY loving the browned butter flavor and want to make it really pop, you could make a little extra browned butter and scrape some of the nutty caramelized bits into the frosting at this point as well. I did make just browned butter cupcakes with browned butter frosting once and they were delicious, albeit extremely rich.

Pipe your frosting onto the cupcakes and top with a pecan or two and LIGHTLY drizzle with the remaining maple syrup. You don't want to put too much because it will just drip off the cupcake and make a sticky mess. Do try to include a little piece of rosemary that was infused in the syrup on the top of each cupcake though. And if your nuts didn't hold onto their salt while roasting, definitely make sure you sprinkle a little extra onto each cupcake. It makes all the difference. 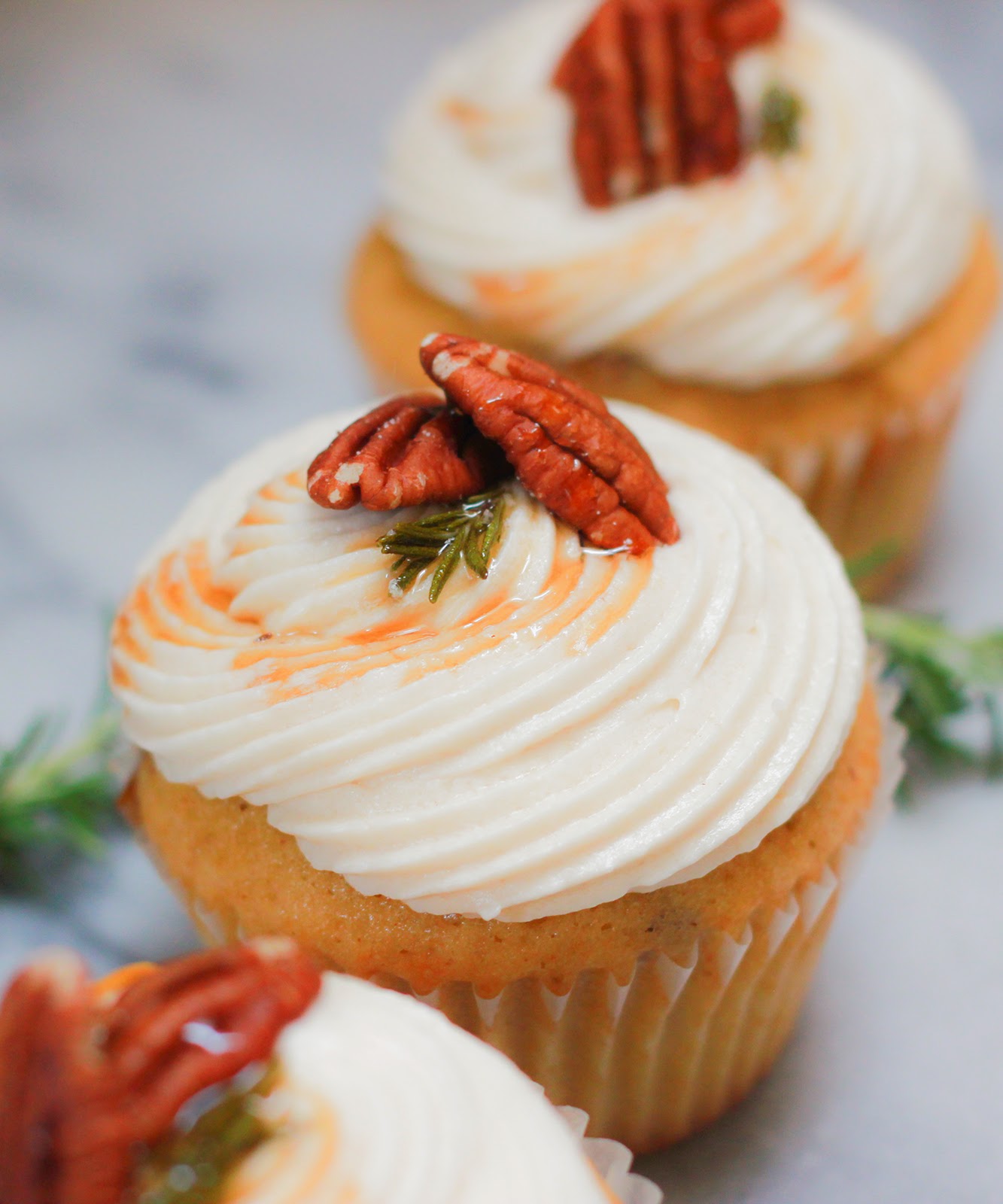