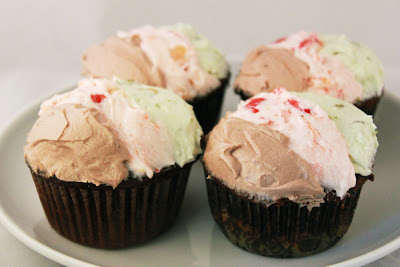 I love spumoni. I remember the first time I had it was when I was probably 7 and visiting family in Portland, Oregon. I mostly remember only odd tid-bits about that trip such as my cousin ordering a salad with honey mustard dressing which was also foreign and fascinating to this young girl who only knew about ranch. But I digress. It wasn't actually spumoni like the way it's supposed to be a slice from a terrine mold with the 3 flavors of ice cream and whip cream in between the layers - it was just a scoop with all 3 delectable flavors: chocolate, pistachio and cherry pineapple. It's like the ultimate reincarnation of Neapolitan.

But, it was years again before I ever saw Spumoni as an option, and it happened to be Dreyers (East Coast translation: Edy's) ice cream that brought it back to me years later. I'm sure that die-hard spumoni lovers out there would be remised to know that I actually adore the terribly fake, Americanized knock-off version of this Italian delight that Dreyers produces. I think they must somehow enhance or overly sweeten the pistachio flavor, because I've had some really REAL pistachio flavored gelatos in my day that were not as endearing to my palette. Knowing that I really love the flavor of the enhanced (chemically produced?) version of pistachio ice cream, I was a little worried about trying to make my own homemade variation of that flavor. I probably could have just bought pistachio extract, but that's just not readily available, and since I tend to bake on a whim, I didn't have time to wait around for an online order. The world we live in, I swear; such inconveniences.

So, I did some reading up on how to make pistachio flavor really stand out, and found Browneyedbaker to have a useful suggestion to steep the pistachios in hot milk, a trick she used to infuse her pistachio ice cream. I think it worked out pretty well, as the pistachio flavor in both my cupcake and frosting hit the spot.

Alas, I went through the process of making these cupcakes in my typical willy-nilly fashion of kind of making it up as I went, so in some cases only have approximate quantities. I'm sure it'll be fine...

Pistachio Cupackes
- 1 cup milk
- 1 cup pistachios (roasted, unsalted), divided
- 1/2 cup flour
- 1/2 tsp salt
- 1/2 tsp baking powder
- 1/2 cup butter, room temperature
- 1 cup sugar
- 1 egg
- a few drops of green food coloring (optional)
Heat the milk up to almost boiling and soak 1/2 cup pistachios in it until the milk returns to room temperature. Strain out pistachios (reserve) and use only 3/4 cup for cupcakes. (Remaining 1/4 cup and nuts will be used for frosting). Add food coloring to milk if using (don't over do the green, just looks good with a little extra color).

Whisk together pistachios, flour, salt and baking powder and set aside.
Beat butter and sugar together until smooth. Add egg and scrape sides of the bowl, mixing until incorporated and fluffy. Alternating with the flour and milk mixture, slowly mix together, scraping bowl as needed, until incorporated. Batter will be pretty thick. (If desired, you can toss in a handful of the pre-soaked pistachios into the batter if you like the extra texture). Spoon a heaping table spoon of batter into the bottom of each cupcake liner. Make next batter:

Cherry Pineapple Cupcakes
These would probably be delicious all on their own (actually, so would the pistachio).
- 1 cup flour
- 1/2 tsp salt
- 1/2 tsp baking powder
- 1/2 cup butter, room temperature
- 3/4 cup sugar
- 1 egg
- 1/2 cup milk
- 1/2 cup Maraschino cherries and crushed pineapple, well drained
- dash of red food coloring (optional)
Whisk together dry ingredients and set aside.
Beat butter and sugar together until light and fluffy. Add egg, and scraping down sides of the bowl as needed, mix until light and fluffy again. Alternating with flour mixture and milk, gradually add each until incorporated. Toss in the cherry/pineapple mix and stir until incorporated. The cherries will probably do a little bit of coloring to the batter on their own, but I helped it along a little with a dash of red food color. This batter will also be pretty thick. Spoon 1 heaping table spoon of it on top of each pistachio layer. Make chocolate: 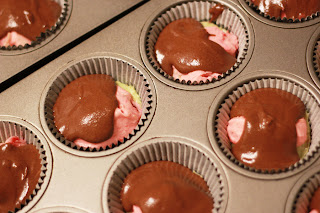 Whisk together dry ingredients and set aside.
Beat together butter and sugar until light and fluffy. Add cocoa powder and whip until incorporated. Add vanilla and egg, and beat until fluffy and creamy looking. Heat water and milk together until almost boiling (I just head in the microwave for 45 - 60 seconds until it steams a bit).  Alternating with flour mixture, gradually add milk and flour until mix is incorporated. This batter will be a bit runnier, so if using a stand mixer and the liquid is getting out of control, whisk together by hand. Try not to over mix. Spoon batter over the tops of the other batters in the cupcake tins until 3/4 full.
Bake cupcakes for 20 minutes and then cool completely. For the record, the chocolate layer didn't rise as perfectly as it should have. I believe I had 2 tbs too much butter, but since this was exactly what I did, I felt it was best to give it to you as I made it. It was tasty, and you cover the top with plenty of frosting, so the less than perfect dome tops weren't a big bother to me. If you want perfection, I say try with just 6 tbs of butter instead of a whole stick and see if that does the trick.

Now it's time to make the frosting.

Beat butter until smooth. Add powdered sugar and beat until incorporated with butter, and creamy, scraping bowl. With beaters running, slowly add milk until frosting gets light and fluffy. Probably only need a couple teaspoons to do the trick. Add in a few nuts and continue to beat until incorporated. Frost 1/3 of each cupcake with the pistachio frosting.

Cherry Pineapple Buttercream
Same idea here
- 1/2 cup butter, room temperature
- 1 cup powdered sugar
- 1/4 cup maraschino cherry and pineapple, well drained (even patted dry with paper towel if you're up for it)
Beat butter until creamy, adding powdered sugar until fluffy, scraping sides of the bowl as needed. Add in the cherry pineapple mix and beat until well incorporated. Could toss in a bit of food coloring here too, but I think the cherries do a pretty good job of coloring on their own. Frost the middle 1/3 of each cupcake.


Beat butter until creamy, adding powdered sugar until fluffy, scraping sides of the bowl as needed. Add in the cocoa powder until incorporated. Add vanilla, and then milk and beat until light and fluffy. You can add more cocoa powder if you like a darker brown color.  Frost the last 1/3 of each cupcake.
Whew! Quite an operation for just "one" cupcake, but totally worth it. I loved them. 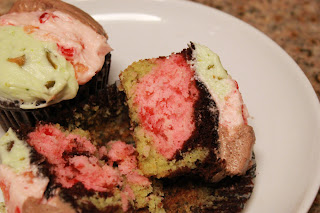 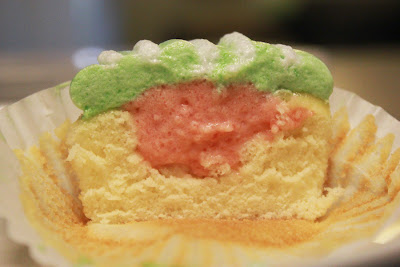 Summer is sort of coming to a close, so I'm a little tardy in posting this recipe. But if you really like watermelon, you might want to bookmark it for when watermelon is back at its peek in season. I personally am not head over heels for watermelon myself, but the idea of a watermelon cupcake seemed like a fun challenge. I used fresh fruit that I pureed and made into a pastry cream filling, and topped the cupcake with a light meringue frostings, one that wouldn't over power the flavor of the filling.

Watermelon Cream
Patience was the death of me on this recipe. You have to let the gelatin mixture set up for a couple hours, but can't leave it all night because you need to whip in the cream at the point where the mixture is just turning gelatinous. I thought I had screwed it up the first time, so made 2 batches of watermelon gel, one of which over set, making watermelon jello. I'm sure it was delicious, but as I mentioned before, I'm not THAT crazy about watermelon, so it didn't appeal to me so much.
- 2 1/4 cups, divided, seeded, watermelon, pureed
- 1 envelope unflavored gelatin
- 1 cup sugar
- 1 tablespoon lemon juice
- 1/2 cup whipping cream, whipped
Combine gelatin and 1/4 cup watermelon puree; set aside.
Bring remaining 2 cups puree to a boil in a small saucepan. Remove from heat; add gelatin mixture, and stir until gelatin dissolves. Stir in sugar and lemon juice, and chill mixture until consistency of unbeaten egg white (2 hours or so, check on it though).
Fold whipped cream into chilled watermelon mixture. Keep chilled until ready to use.
White Cupcake
- 12 tablespoons (1 1/2 sticks) unsalted butter, softened
- 1 1/2 cups sugar
- 2 cups all purpose flour
- 2 teaspoons baking powder
- 1/4 teaspoon salt
- 3 large eggs
- 3/4 cup milk
Preheat to 350 degrees. Line cupcake tins (makes 18-24).
In a separate bowl, whisk together flour, baking powder and salt. Set aside.
With mixer or in stand mixer, beat butter and sugar until light and fluffy. Add eggs one at a time until incorporated, scraping the sides of the bowl as needed. Gradually add the flour mixture to the butter mixture alternating with the milk mixture until all mixed together.
Pour the batter into prepared tins. Bake 20 minutes, then cool completely. Hollow out each cupcake making room for filling, and then pipe filling into each.
Italian Meringue Frosting
- 3/4 cup sugar
- 1/4 cup light corn syrup
- 1/4 cup water
- 4 egg whites
- 1/8 teaspoon salt
- green food coloring
Beat egg whites at high speed with an electric mixer until foamy; add salt, and beat until stiff peaks form. Let sit while you cook syrup:
Cook first sugar, corn syrup and water in a heavy saucepan over medium heat, stirring constantly, until sugar dissolves. Bring to a boil, and boil until a candy thermometer registers 248° (about 5 minutes).
With mixer running, gradually whisk hot syrup into egg whites, whisking until stiff peaks form and frosting is of spreading consistency.
I added a couple drops of green food coloring to the whole batch and put half the frosting in a pastry bag, then added a few drops more to the remaining frosting and filled another bag with the remaining frosting. 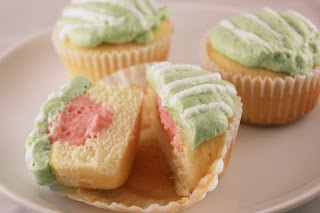 Once cupcakes are filled, pipe a stripe of the darker green frosting across the tops of the cupcakes, then go back with the lighter frosting to make the alternating stripes, similar to how a watermelon has stripes. I felt like the look of the cupcakes was only so-so, as the frosting was a little aerated, so had a really bubbly texture, versus a watermelon that is rather firm. But, everyone who tried them liked them! I usually don't refrigerate cupcakes, but since these had the gelatin filling, I didn't want to change them melting. Apparently the side effect was that the filling had a delightful chill, perfectly capturing the summer refreshment of watermelon.
Posted by Unknown at 8:54 AM 0 comments