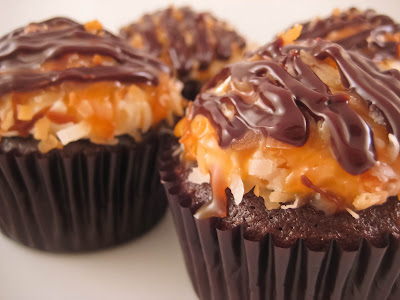 I wish I could say that this cupcake flavor was inspired by the recent news of the Girl Scout cookie cut-backs. But alas, even though I think I'm a bit early for Girl Scout cookie season (at least I haven't seen any troops outside the grocery stores yet), but I had those delicious Samoa cookies on my mind. I don't really know why the Samoa's (or "Caramel De-lights") ended up at the top of my favorite GS cookie list considering I don't generally go for coconut goodies, but maybe the marriage with caramel and chocolate is just too much to resist.

I tried the traditional cookie recipe for this last year and absolutely loved it, and figured it could use the cupcake make-over routine. Not that the cookie needs improvement, it's just always fun to play with the flavors in a different form. The cupcake rendition does have an added frosting layer which you won't find in the cookie, but the cupcake doesn't have a crunchy cookie either. In any case, I think it's quite tasty. I chose a chocolate cupcake base to keep the flavors rich (but it might be good with a vanilla cupcake too), topped with a carmel buttercream, toasted coconut flakes, caramel swirl, and then a bittersweet ganache. So far, everyone who tried this one was very enthusiastic about it.

Toast 1 cup of sweetened coconut on a sheet pan for approximately 15 minutes, making sure to mix around the coconut every 5 minutes so to get the most even toasting. Set aside to cool.


This makes about 1-3/4 cups. You really only need about 1/4 cup for the cupcakes, but you can keep the rest refrigerated for a couple months (but I'm sure you could find reasons to use it up before then).


Mix the water and sugar in a large heavy-bottomed saucepan. Cover and cook over low heat until the sugar dissolves. Increase the heat and boil uncovered until the sugar turns a medium brown, about 5 to 7 minutes, stirring occasionally with a wooden spoon. Watch it carefully at the end, as it will go from caramel to burnt very quickly. Stand back to avoid splattering, and gradually add the cream and the seeds scraped from the vanilla extract. Simmer until the caramel dissolves and the sauce is smooth and thick, about 2 minutes. Serve warm, or add another 1/4 cup of heavy cream and serve room temperature.


Mix flour, baking soda, powder and salt together in a medium sized bowl. In separate, heat proof bowl, melt butter in microwave (45-60 seconds). Mix in cocoa powder until mixture is paste-like and add in vanilla until smooth. Whisk in sugar, then eggs, one at a time until incorporated.
Mix water and milk together in small bowl. Alternating between flour and water mixtures, add each to the chocolate mixture, beginning and ending with flour. Mix until just incorporated. Fill cupcake tins and bake for 20 minutes. Let cool.

Make Caramel buttercream:
Whip butter until smooth. Slowly add in powdered sugar 1 cup at a time. Once incorporated, add in milk and caramel sauce until mixture is light and fluffy. Scrape down sides of bowl as necessary.

Assemble cupcakes. Using a piping gun or bag, frost the cupcakes. No need for making it pretty, since the next step is rolling the frosted cupcakes in the toasted coconut. Then drizzle caramel sauce over the coconut followed by a drizzling of ganache. 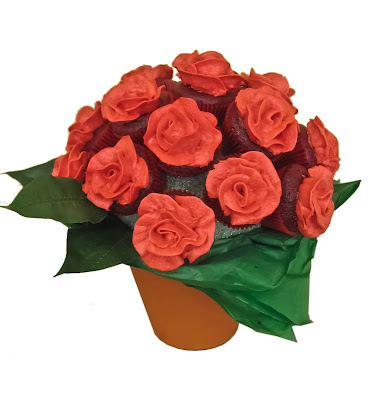 Traditionally, I'm not a very traditional Valentine's Day celebrator. So it's probably ironic, or just Ferengi, that I am offering a fun alternative to the usual Valentine's Day gift.
I cannot take credit for the idea, but kudos to my buddy Carol for seeing the idea posted and sending it my way. Per a quick google search, it has been done many times before, and in a few different ways, but the one I finally settled upon was an 18 mini cupcake bouquet, neatly nestled into a flower pot.
I'm offering these treats up for $30 each. If you're local (read: I don't deliver), let me know if you want to order a batch for your sweetie this Valentine's day. Shoot, they might even share with you, but I make no promises.
Posted by Unknown at 10:28 PM 0 comments 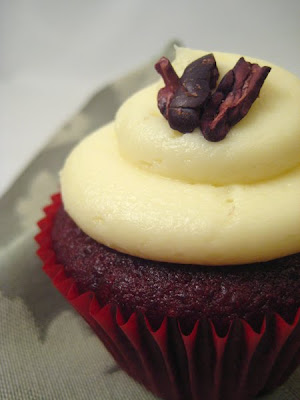 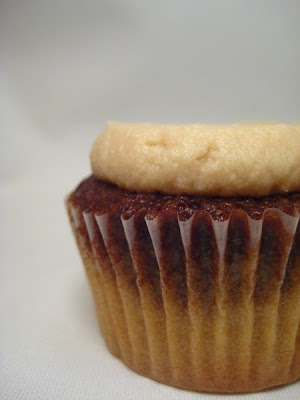 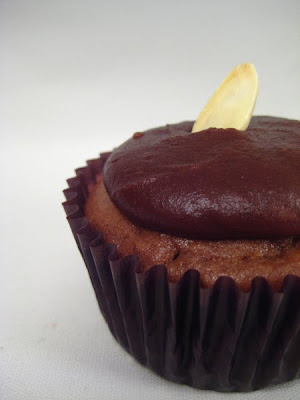 Hey there! Apologies, as the holidays engulfed me. I was happily baking away this whole time, and you had no idea!
Well, a quick recap, if possible, the holiday tins were a hit and easier to manage this year thanks to a little more organizing, pre-planning, and my fabulous Sous-Chef, Blair. There were also a bunch of parties to attend and host, which required goodies, not to mention the holidays themselves. A heavenly array of treats to devour.
But all mixed in with that was the ever-present recipe contest hosted by Scharffenberger and TuttiFoodie. Having been given notice about this contest a good 3 months ago, I can't say it was poorly warned, but with all the other stuff I just mentioned, this contest fell to the bottom of the pile... until last week, that is. To be fair, I had been thinking about it since October, if that counts.
So the deal: Big prize for the winning recipe which will be judged by some cupcake experts as such: "creativity and whether the recipe represents a spirit of adventure (35%), taste of finished recipe (35%), ease of preparation (20%) and appearance (10%)." Creativity does pertain somewhat to their list of "adventure ingredients: "stout beer (oatmeal, chocolate, imperial or any other stout); ricotta; buttermilk; coconut butter, coconut milk or coconut cream; saffron; molasses (light, dark or blackstrap); adzuki bean; fresh beet; sweetened condensed milk; fresh or whole dried chili pepper; bee pollen; meyer lemon; almond flour; and Sumatra coffee bean." In the end (the end being today at midnight), I submitted 5 recipes, some more adventurous than others, of which I will gladly post... if I win, that is. No point in giving you guys failure recipes!
But so you're in the know, and maybe have some feedback on what you think sounds like a winning recipe, the submissions were:
Beet Velvet Cupcakes with Mascarpone Cream Cheese Frosting - using beet & buttermilk (first photo)
Raspberry Truffle Cupcakes with Sweetened Ricotta Frosting - using Beet & Ricotta (I only took a couple bad photos of this one, so... maybe just use your imagination)
Black & Tan Cupcakes with Stout Ricotta Frosting - using Stout, Molasses & Ricotta (2nd photo)
Chocolate Tiramisu Cupcakes with Marsala Mascarpone Frosting - using Almond flour & Sumatra coffee (photos on main website)
Chocolate & Almond Mochi Cupcakes with Adzuki Ganache - using Almond flour, sweetened condensed milk & adzuki beans (3rd photo)
I actually taste-tested all of these before submitting (well, minus the Chocolate Tiramisu, because it's the same recipe I use all the time...er... well, with one small exception, but I'm sure it's fine...) so I can at least stand by them. I think the Beet Velvet is the most delicious, but like most red velvet cupcakes, they are more of a vehicle for the cream cheese frosting, so am not sure it should count. Otherwise, I enjoyed the flavors and textures of the Black & Tan (I used Harp lager for the "tan" portion of the batter), and the Mochi cupcake probably qualifies as the most adventurous, but it is different - the rice flour lends itself to a more chewy texture and the adzuki beans are somewhat granular, so yeah, the texture: it's a bit different.
Winners won't be notified 'til almost March, so hang in there for news. If you hear nothing, assume the worst ;-)
Posted by Unknown at 6:42 PM 0 comments