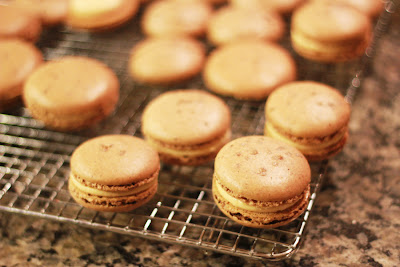 So my friend Carol and I have had 2 macaron bake dates in the last month or so. We both have been experimenting with them on our own, and were getting pretty confident that we had them mastered. So we decided to put our baking caps on and work together on a couple flavors.
Well nothing did work out quite right that first evening. Every batch we made was gooey, and stuck to the bottom of our pans. Even our fillings were failing that night. We were both really sad after that, thinking we might have to revert back to the unscientific macaron wives' tales to have success. After a few days, Carol figured out that it was actually her oven that was off by about 50˚.  What a relief! Maybe we weren't failures after all! 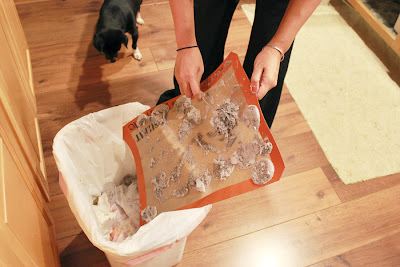 But we had to be sure, so we set up another bake date to try again. We definitely did better that time, after Carol got a thermometer for in her oven to make sure it was at the right setting. We made chocolate macarons sprinkled with smoked sea salt and filled with salted caramel buttercream. Those came out great. We also made chai spiced ones, but apparently the addition of the chai powder to the macaron shells was a bad combo, as they did not rise or bake well (we suspect the non dairy creamer in the powder might have been the culprit, as just adding the spices of chai would have probably been fine). 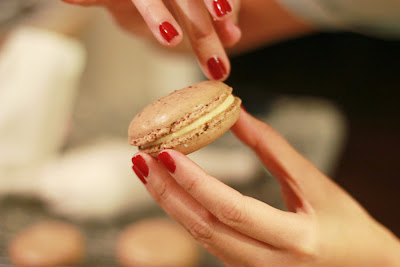 What's even better is that Carol posted the recipe online already, so all I need to do is link to it! Wee. She took an awesome photo too. As well, we tried to simply whip the caramel so it had more body and could stand alone as the macaron filling, but it was still too thin, so decided to do buttercream instead. Can't go wrong with macarons with buttercream, really. Looked pretty when we were whipping the caramel though. 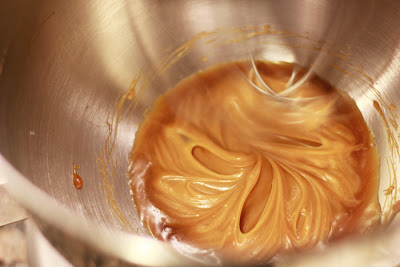 As well, she found a site that actually detailed more scientific reasoning for all of the wacky wives' tale rumors we'd been reading up on, so were relieved that some of the tricks actually had good reasons behind them. If you're into macaron baking, I recommend checking it out just so you know the why's of how to do things.
Posted by Unknown at 10:04 PM 0 comments 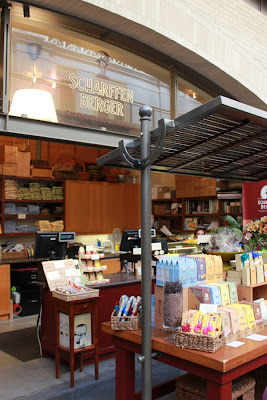 Last Friday, I had the fun privilege of being invited on a Scharffen Berger Bakery Crawl in San Francisco. A very fun event where 30+ unsuspecting members of the media (hey that's me!) hitched a ride on a trolly bus and drove to 4 lovely bake shops to sample wares that featured Scharffen Berger chocolates within them. The company is launching another, newer adaptation of their chocolate adventure contest; this year the idea is to elevate a classic recipe.
Meeting point was at the Scharffen Berger Ferry Building shop where we were picked up by the trolly bus. It was a gorgeous October afternoon, and none other than the beginning of Fleet week, so the Blue Angels were doing a couple practice fly overs when we started. *awesome* 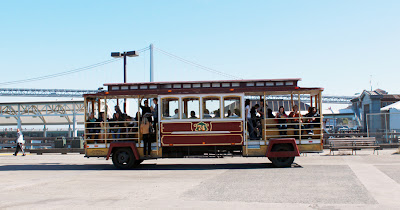 Our first stop was Anthony's Cookies where we sampled a double chocolate chunk cookie with walnuts. It was pretty much a perfect cookie: gooey inside and chewy/crispy outside. The nuts were a great add in with the chocolate and the flavors were well balanced. It was at this moment though that I had my first experience of being a member of the foodie paparazzi. I think everyone around me was more interested in taking a picture of the product than tasting it (not to say that they didn't get devoured in the end). Also of note: the cookie was still fabulous 2 days later when I got around to eating the rest of the "take home" sample. Delicious. 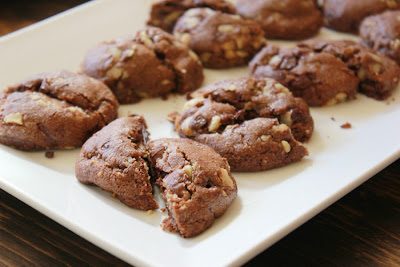 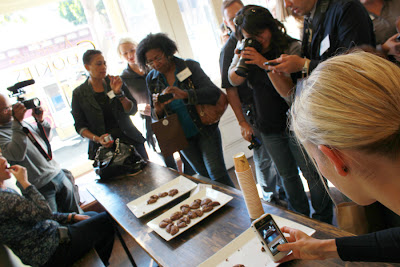 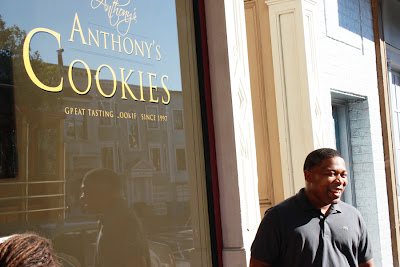 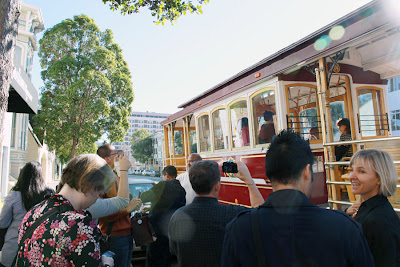 After spending a little time chatting with Anthony himself and interrogating him about what his Twitter handle was, we packed back into the trolly and headed for Citizen Cake. 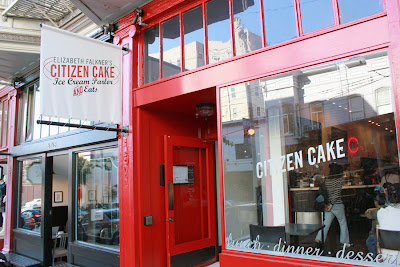 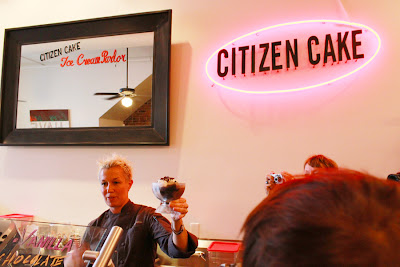 I had been there myself a couple years back, but it has since moved, expanded, and transformed into what feels like an old fashioned ice cream parlor. Very cute interior, and the desserts in the cases looked impeccable. But we were there to try a sundae, hand made especially by Elizabeth Falkner, owner and celebrity chef/baker herself. Running with the idea of elevating a classic, she created an egg free chocolate gelato that she froze on the spot with liquid nitrogen (that she keeps a tank of right by the cash register!) and was an epic crowd pleaser to watch her make (more food paparazzi on that one). 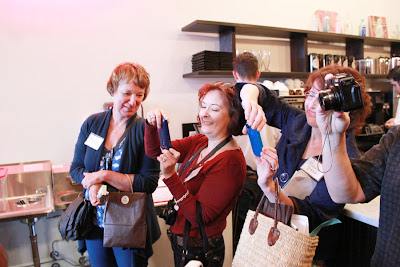 Apparently, liquid nitrogen was a Victorian era method for making ice cream, so while it sounds all spacey, scientific, and futuristic, she's actually harking back to ye old days when making this dessert. The final sundae was a dollop of gelato, a dollop of home made marshmallow cream (using xantham gum instead of gelatin - gotta remember that one), and fudge, nibs, and chocolate curls. It was very tasty. I enjoyed the marshmallow cream a lot, and while the chocolate gelato was good, I felt it could have been richer (it melted into a very low viscosity pool as I was eating my sample), which made me think it was unnecessarily low in fat. But the chocolate flavor was very good, and since this tour is all about chocolate, that is what I will take away from it. 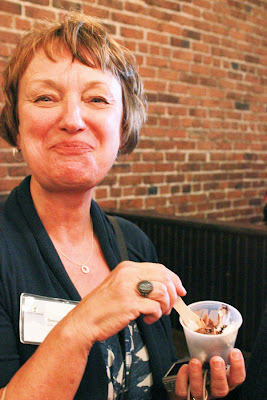 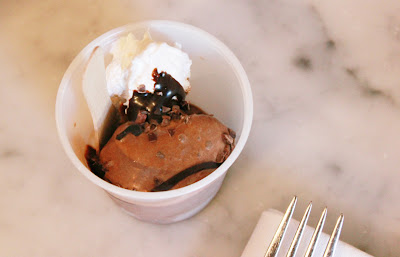 Jumping back in the trolly we swung over into Ghirardelli Square to sample a special Kara's cupcake flavor. She designed a "candy bar" cupcake featuring a chocolate cupcake, a dollop of caramel in the center, peanut butter ganache frosting and a sprinkling of sea salt. Yeah, it was pretty good. Very rich, as peanut butter often does for dessert. Sadly, I don't think I ended up getting a good sample of the caramel in the half a cupcake I tasted, which was disappointing, as I was looking forward to it. 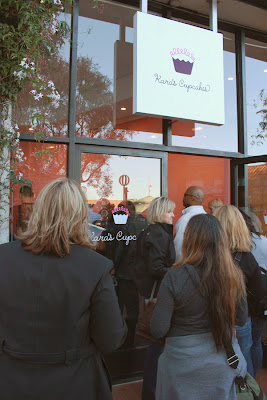 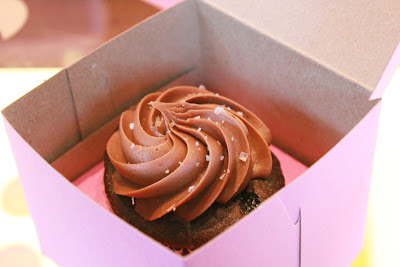 By this time, we were running a bit late, so we headed back to the Ferry building for another quick stop at Miette to try a triple chocolate cream cake, but had to get it to go to make it to our final engagement, a baking demo by Yigit Pura. I did sample the Miette cake the next day when my stomach was mostly recovered from the sugar overload of Friday night, and it was quite delectable. Very moist, rich, creamy and chocolatey, with a lovely ganache topping. No complaints. 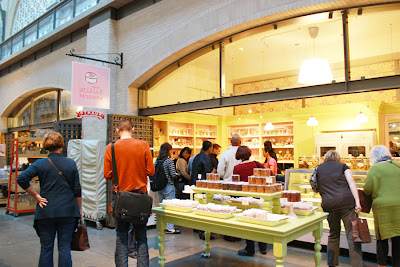 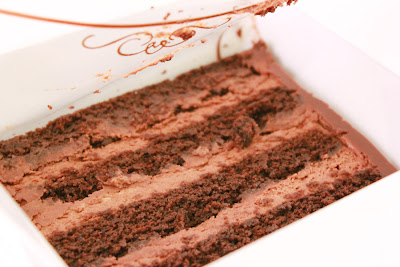 Moving on quickly to the baking demo though, our host Yigit was very charming and filled in his baking tips with funny anecdotes such as making chocolate and cream get along (2 unlikely couples: fat and water) by adding a little invert sugar, kind of like giving you and your in-laws a few gin martinis to get everyone relaxed. Silly and memorable. He also said not to whisk ganache, which I am definitely guilty of doing, so glad I took home a few good pieces of advice in addition to all the chocolate desserts. 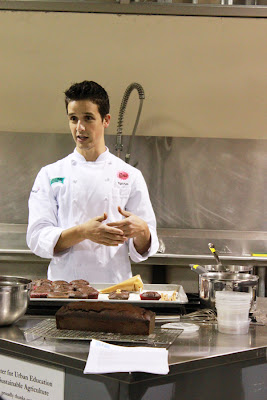 He created a dessert using his go-to chocolate cake with chai tea spices added in, filled with a dulce de leche filling, and topped with ganache and a little pretty gold leafing. Initially I thought the cake was dry, but after further inspection (yeah, I ate the whole thing), I feel like it was just really dense, and I was already really parched from eating so much chocolate already. The spices were pretty good, but it's not my favorite combo for a chocolate dessert. It was well done though, so if that's up your alley, you would enjoy it. 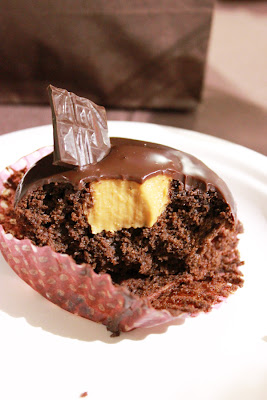 To culminate the evening, we did get more swag, like an apron (chocolate stains won't show on that!), a lovely (huge) whisk (you can never have too many whisks, right?), and of course, chocolate. This is on top of the take home samples, and tasting squares they fed us in between bakery stops, of course.
I may have made myself a little sick on chocolate desserts for dinner, but the whole experience was completely worth it. It was also very fun to meet with other foodies, bloggers, journalists, and chocoholics. 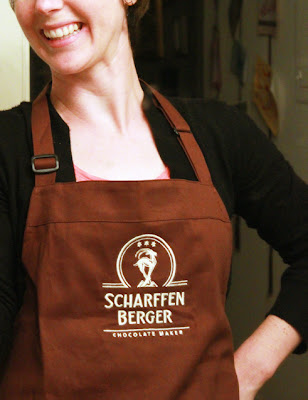 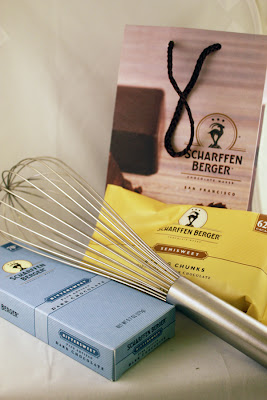 If their intention was to get me pumped about the contest, they definitely succeeded. I am looking forward to "elevating" a classic of my own, and left feeling inspired by what the other bakers had created.
Posted by Unknown at 7:26 PM 1 comments 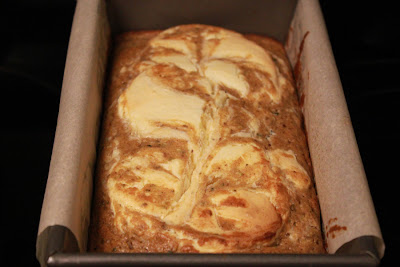 This is a bit more like an end of summer post, since we're phasing out the summer squash in favor of warm winter squash, but the flavors are very similar once you throw in the cinnamon, so I don't mind letting this one summer recipe sneak into my fall repertoire. Besides, the fall is the time of year I feel most nostalgic about being a kid, and zucchini bread was one of those things my mom knew how to make fairly well. No offense to my dear mother, but there aren't too many things she cooked or baked that I have fond memories of.

Also of note, I threw in a few ingredient substitutes when I made this batch, and while I don't think they're necessary, I figured it'd be good to share what "worked" if you were out of an ingredient, for example. 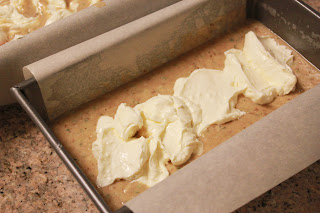 Bake the loaves for 55 minutes, and check with a toothpick if they're done. Add 5 minutes to baking time until cooked through. For muffins, should take about 20-30 minutes depending on how full you fill the cups. 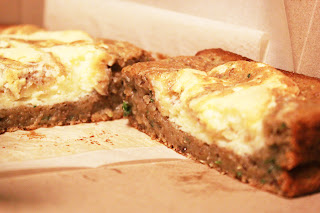 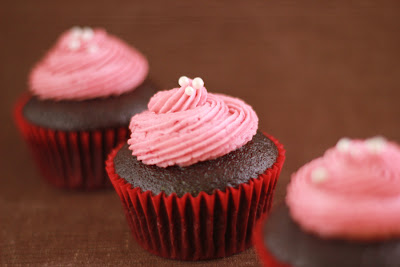 This post is just a quick frosting suggestion that can dress up a variety of cupcakes: Raspberry. I put this on top of a chocolate cupcake the other day, and I think they were a delightful match.

Beat butter until fluffed. Add powdered sugar and beat together until crumbly. Scrape sides of the bowl and add vanilla. Mix until incorporated and fluffy. Toss in the raspberries and mix until incorporated (scrape the bowl again). Initially, the moisture in the raspberries will make it look like the butter is separating, but once you've blended it all together it should come together nicely.

Probably would have made a better Valentine's Day Post, huh?
Posted by Unknown at 7:15 PM 0 comments