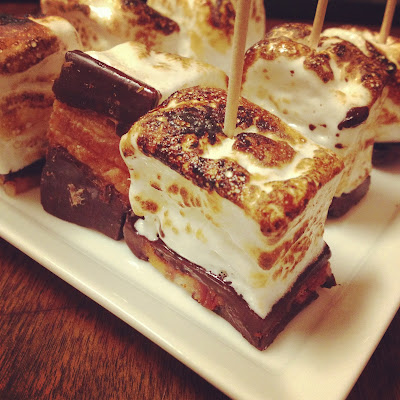 My roommate and I hosted our first annual Porktober Party this past weekend, and for the occasion I whipped up a gourmet variation of s'mores that featured bacon.

First step is removing graham crackers and making a crust of bacon in its place. Then you melt rich, bittersweet chocolate over the bacon strips, forming a solid sheet of chocolate covered bacon, and top that with homemade marshmallow cream, and voila! Cut that into squares and torch until crispy and caramelized. No harm in using only the good stuff. We made a special trip to Fatted Calf for the occasion and bought a couple packs of their thick-cut bacon for the purpose. Be sure not to choose a bacon that is seasoned with anything like pepper - the applewood smoked or similar varieties are best for this purpose.

So here's how you do it. I am personally a big fan of baking bacon. I like how I can just pop it in the oven and not mess with it for 30-40 minutes (for thick cut bacon - at 375˚), flipping it only once halfway through. I also like how when you say baking bacon out loud, you sound redundant. Make sure your bacon is super crispy; you don't want chewy, wilted bacon for this. For the full recipe, you'll need 12-14 pieces of bacon, depending on how big it is and how much it cooks down. Seems safe to always have more than you think you'll need.

While the bacon cooks, chop up some nice, high quality dark chocolate. Or milk chocolate. Whatever your preference, just make sure you use a good one. I featured some Scharffen Berger bittersweet in this recipe (70%). I sort of eyeballed the quantity here, but I'd say it was about 8 ounces of chocolate altogether. You can always add more if it doesn't look like enough. 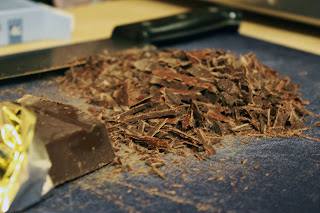 Place a sheet of aluminum foil along the bottom and up the sides of (2) 8x8 or 9x9 inch baking pans and lightly spray with oil or spread with butter on all sides. Once the bacon is finished, and cooled slightly, layer along the bottom of the pans as close-knit as possible, filling in gaps with pieces of bacon if you want full coverage. Then sprinkle with chopped chocolate as evenly as possible and pop back in the oven for 1-2 minutes until the chocolate has started to melt and is easy to spread with a spatula. Be careful not to work too hard to spread it so that the bacon stays in place on the bottom of the pan. I aimed to have a roughly 1:1 ratio of bacon and chocolate, focussing mainly on the chocolate acting as the mortar holding the wall of bacon together. I'm sure there are some who would have had no problem with more chocolate. Your call. 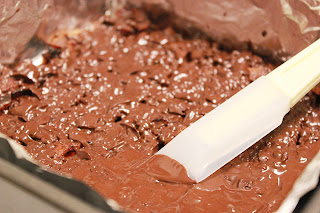 You can let this set up at room temperature while you make the marshmallow, or if you're an excellent multi-tasker and will have the marshmallow done before chocolate normally sets, you can pop it in the fridge until firm.

Now to make marshmallow. I just used the recipe I found ages ago on Smitten Kitchen and have had great success with. I would disclaim that it's not a vegetarian friendly version of marshmallow, but as you have read this far into my post about bacon s'mores, I'm guessing you don't care. Marshmallows are actually one of the easier candy items to make, in my opinion. They don't require getting the boiling sugar up to that high of a temperature, and if you have a stand mixer, they basically just whip themselves for most of the process. A note about the recipe: the only thing you don't need to do is dust these with powdered sugar, so you can skip that ingredient. 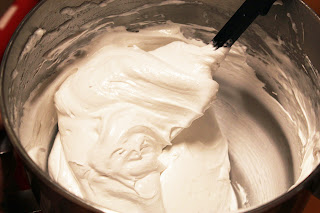 Once you have your marshmallow fluffed and ready, spread it over the tops of the bacon chocolate bars until smooth (or as smooth as you can get considering it's difficult to work with). You need to let it set up in the fridge for about 3-4 hours, at which point it will be ready for torching. 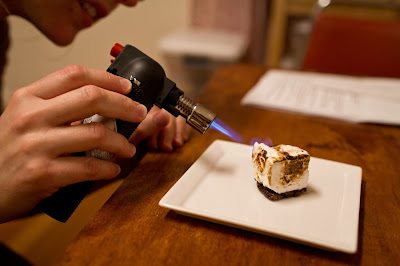 Lift the aluminum foil out of the pan and cut into roughly 1 inch cubes. A trick with cutting marshmallow is to have your knife blade be slightly wet. This means getting it wet in between each cut, so might as well keep a tall glass of water to dip the blade in by your workspace as you are cutting to speed up the process. Once your squares are cut, they're ready for flame. I happen to own a lovely creme brulee torch which does the trick better than anything. I am sure a more resourceful person could come up with a way to use a regular cigarette lighter, or the oven on "broil," but I enjoy having more control over the toasting process. After all, marshmallow can go from perfectly caramelized to carcinogenic in seconds.

These were not universally enjoyed, but most people who liked them loved them, so if you're into the sweet, salty, savory flavor combo, I'd say they're worth trying at least once.
Posted by Unknown at 11:00 AM 0 comments