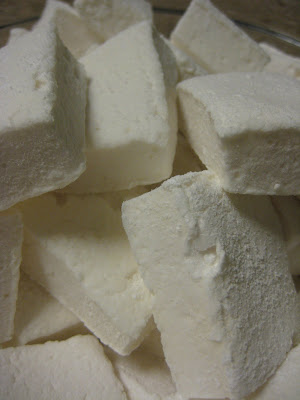 So it's apparent that I'm not a good blogger. I've gone over a month without a word, but certainly not without turning on my oven!
Alas, I'm back, and my first treat this year is homemade marshmallows. I have been eying the idea for some time, but after a few candy making snafus, I almost lost my nerve. Luckily I have been saved by the good fortune of this recipe. My dear friend Kristy sent me this beauty earlier in the weekend, Hot Chocolate Layer Cake with Homemade Marshmallows, but I was a little scared off by the intensity of the cake (I just had chocolate molten lava cakes for dessert 3 days ago and am still recovering), but was interested in the marshmallows. After cross-examining a few online recipes, I dutifully followed one of my favorite food bloggers, Smitten Kitchen, and found her recipe for marshmallows, which, unlike most others, included egg whites (as well as a couple key tips on how not to get your fingers involved in the sticky mess!)
I tried not to pull from her site verbatim, but I didn't change much in her instructions.

In bowl of a stand mixer or in a large bowl sprinkle gelatin over 1/2 cup cold cold water, and let stand to soften (about 5 minutes are needed).

In a separate bowl beat egg whites until they hold stiff peaks. Beat whites and vanilla into sugar mixture until just combined. Pour mixture into baking pan (it was suggested to not worry about scraping the bowl down - I was satisfied with how much of the solution I got out, so second the recommendation). Sift powdered sugar evenly over top. Chill marshmallow, uncovered, until firm, at least three hours, and up to one day.

Run a knife around edges of pan and invert pan onto a large cutting board. Gently loosen marshmallow and ease onto cutting board. With a large knife cut marshmallow into roughly one or two-inch cubes. Sift remaining powdered sugar over marshmallows, and roll the marshmallows through it, making sure to get the sugar on all six sides. Shake off excess.

Ok, so then you eat them. But I didn't have to tell you that.

I'm thinking of trying this again but with a different flavoring. I think the vanilla was a bit overpowering too, which I would consider cutting down on the amount. I saw a recipe for strawberry flavored ones, which sounded inspiring.

Homemade s'mores, anyone?
Posted by Unknown at 8:37 PM 1 comments