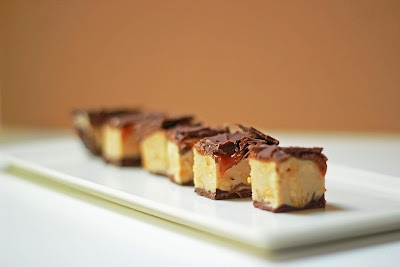 I'm so negligent. This will be my second post all year and it's officially November. I have so many things I could share, but I've landed on the urge to post this snickers bar recipe in honor of Halloween. I have a pretty serious soft spot for snickers. While I'm not your avid peanut butter + chocolate consumer, there is something satisfying about the combo, and sometimes it just gets me through the afternoon to snack on a few bite size snickers.

I'm constantly desiring to make things from "scratch" as much as possible, mostly for the challenge, but also partially to play the "then I know what all goes into it" card.

So what makes a snickers? Nougat with peanuts, chewy caramel, and chocolate coating. The recipes I found online for these snickers "bars" were following the same formula of creating the bars in these layers, though the one I replicated did incorporate peanut butter into the chocolate layer, making it too soft to count as a coating (hence the bar). My thoughts on the outcome are that these were very tasty (who is going to complain about chocolate, peanut butter and caramel though really?) but they were not quite snickers. Perhaps there is something special about the taste of partially hydrogenated soybean oil that homemade just can't compete with. Or perhaps I just need to experiment more.

I took the recipe from Brown Eyed Baker and added 2 extra homemade steps to it: homemade marshmallow fluff and caramel sauce.

2. Make caramel sauce: *So, in this recipe I just made a pretty standard salted caramel sauce, kind of like what you'd pour over ice cream or decorate cupcakes with. It's a bit runny, and I think a caramel chew would be better served in this recipe. Nobody complained about the flavor, but leaving these bars out at room temperature led to a lot of caramel leakage. I've made chewy caramels before, so not sure why I didn't think through to make it for this recipe instead of the sauce. If you make these, I recommend this recipe. The major difference in making chews versus sauce is a) you use corn syrup and b) once you've incorporated your fat (butter and cream) you bring it back up to a soft ball temperature. If you like your caramel soft, then by all means follow these tried and true instructions for making caramel sauce (but add a dash of salt in at the end). Let it cool while you continue on to the other steps.

3. Make the Chocolate Layer: Melt together the chocolate chips and peanut butter in the microwave on until completely smooth and melted, stirring every 20-30 seconds (or do it over a double boiler). Pour about half of it into the prepared baking dish and smooth into an even layer. Refrigerate until cool and hard, about 30 minutes. Set aside the remaining chocolate for last step.

4. To make the fluff, in the bowl of a stand mixer (set with whisk attachment), pour in ¼ cup cold water and sprinkle with gelatin and let sit for at least 5 minutes while you prepare the syrup. Meanwhile, in a small sauce pan, heat sugar, remaining ¼ cup water, salt and corn syrup on medium heat stirring until dissolved. Once it starts boiling, stop stirring and bring it to 240˚. Turn stand mixer on low and carefully pour hot syrup down the side of the bowl. Once all syrup is in the bowl, turn speed all the way up and let it go for for 5-8 minutes until fluffy. Whisk in vanilla until incorporated and then set aside (or better yet, pour mixture into a lightly greased bowl so it's easier to get out when you're ready to use it in the next step).

5. Make the Nougat: Melt the butter in a medium saucepan over medium heat. Add the sugar and evaporated milk, stirring until dissolved, and bring to a boil. Reduce the heat to low and cook for 5 minutes, stirring occasionally. Milk on the bottom of the pan will start to brown slightly, so be sure to not let it get too dark. Remove the pan from heat and add the marshmallow fluff, peanut butter, and vanilla extract, stirring until completely smooth. Fold in the peanuts, then pour over the bottom chocolate layer. Refrigerate this layer until cool, about 30 minutes.

6. Once your nougat is set, pour the caramel sauce (or chewy caramel) over it and let it set about 30 minutes.

7. Once the caramel layer is cool, you'll put the final layer of chocolate peanut butter on and let it set up in the fridge for at least an hour before serving. If you chocolate mixture seized up in all this time between making it in step 3, just pop back in the microwave 10 seconds at a time, stirring between to get it back to a spreadable consistency.

Brown eyed baker says that the consistency is great at room temperature, but if your house is a little warm, the chocolate gets melty, so might have to store in the fridge. Since I used the runny caramel sauce, I've just been keeping them in the fridge until ready to serve.