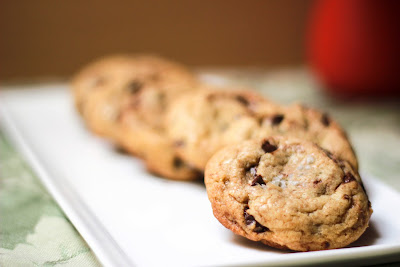 On New Year's Eve, we went to a friend's house and someone had brought salted browned butter rice crispy treats and my will power instantly crumbled. I know brown butter is amazing, but don't often think to use it. So, even though I'm not really into resolutions, I am now resolved that 2014 will be the year of brown butter.
I will be making the rice crispy treats next, but first, since I had all the ingredients on hand, I made these chocolate chip cookies instead. Based on Alton Brown's "the Chewy" chocolate chip cookie recipe (which is solid), I modified it slightly (mostly based on the ingredients I had, so if you say, don't have molasses, just stick the original recipe) and browned the butter instead of just melting it, and added sea salt on top.

(If you don't have a scale, brown eyed baker has included measuring cup equivalents for the ounces in her recipe.)

Directions
Melt the butter in a large saucepan over low heat. Keep a close eye on it and stir frequently. The butter will probably try to boil or sizzle, so don't let it do that. First it will foam up and be hard to see what's going on underneath the foaming. Then the foam will subside and you'll start to see little "bits" floating in the butter. That's the good stuff. Keep your eye on those bits and when they start getting to a caramel color and the aroma is nutty, remove from heat and pour into a stand mixer bowl (or large bowl, whatever you are using).

Sift together the flour, salt, and baking soda and set aside. Add the sugar, brown sugar, and molasses to the butter, and beat with the paddle attachment until all is incorporated, about 2 minutes.

Meanwhile, whisk together the whole eggs and vanilla. Reduce the mixer speed and slowly add the egg mixture. Mix until thoroughly combined, about 30 seconds.

Gradually pour the dry ingredients, scraping down the sides of the bowl a couple times. Here's the part where you add the chocolate chips, but be warned, if your butter is still really hot, the batter will also still be hot and melt those chips. I actually realized this by doing it, so I'm giving you the advanced warning now. If you didn't let your brown butter chill enough, then I'd recommend taking a break at this point to let it come to room temperature. Or if you're impatient like I can sometimes be, go ahead and dump the chips in now, but don't stir more than is needed to just combine and then quickly throw the bowl in the fridge and chill for about an hour (something you should do even if you've waited for your butter to cool down first).

I used an ice cream scoop that gave me about 1-1/4 inch balls of dough (Alton says 1.5 ounces of dough) and I was able to get about 24-26 balls of dough. Place your scoops on a parchment or silpat lined baking sheet with about 2-3 inches between each for spreading. Sprinkle each with just a dash of sea salt (you may have to press the salt into the dough, versus literally sprinkling it). Bake for 10-15 minutes, depending on your oven and how chewy and melty you like your chocolate chip cookies. I did the minimum 10, just when the edges were beginning to brown, but the top gave way a little when you touch it. They will fall, and they will be devoured after you've let them cool for maybe 5 minutes. Maybe. 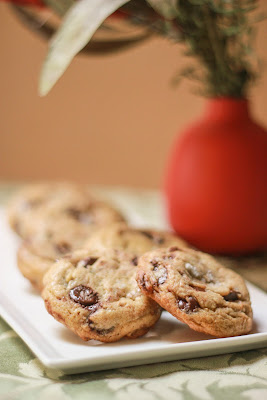