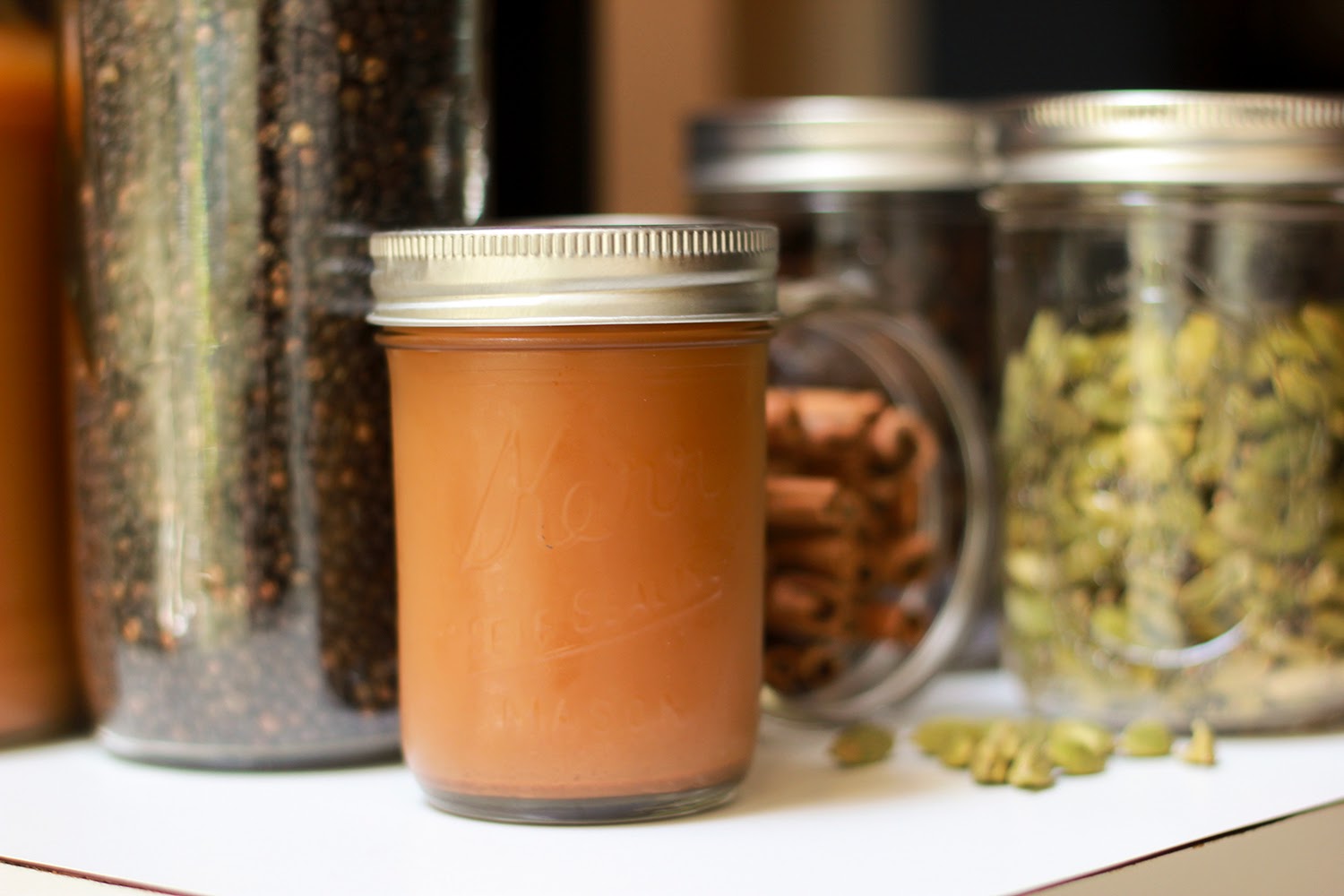 Today is my 5th Blogiversary. Hard to believe it's been that long.

I have a pretty non-standard entry for such a celebration, but it's been brewing for a while, so no time like the present to post it.

I've been on a mission for well over a year now to perfect my own chai blend. I'm pretty addicted to the stuff, in lieu of coffee which I just can't seem to get into. Sacrilege in San Francisco, I know. Luckily I'm not alone in my love for chai and lots of shops around town offer some very wonderful options. But I can almost never just let it be that someone else makes a thing that I don't at least try to make myself.

I started out following what seems to be the ONE chai recipe floating around the internet. One of those phenomenons where it looks like everyone copied the same source, offering me no variation options. And it was all well and good, but I was not nearly satisfied. To me, the perfect chai is only a little sweet, and heavy on the spice. Not just spice-full, but I like it with a little bit of bite.

So after months of tweaking, I am finally satisfied with the chai I can't get enough of, and am no longer craving the blend I used to get at the shop down the street. 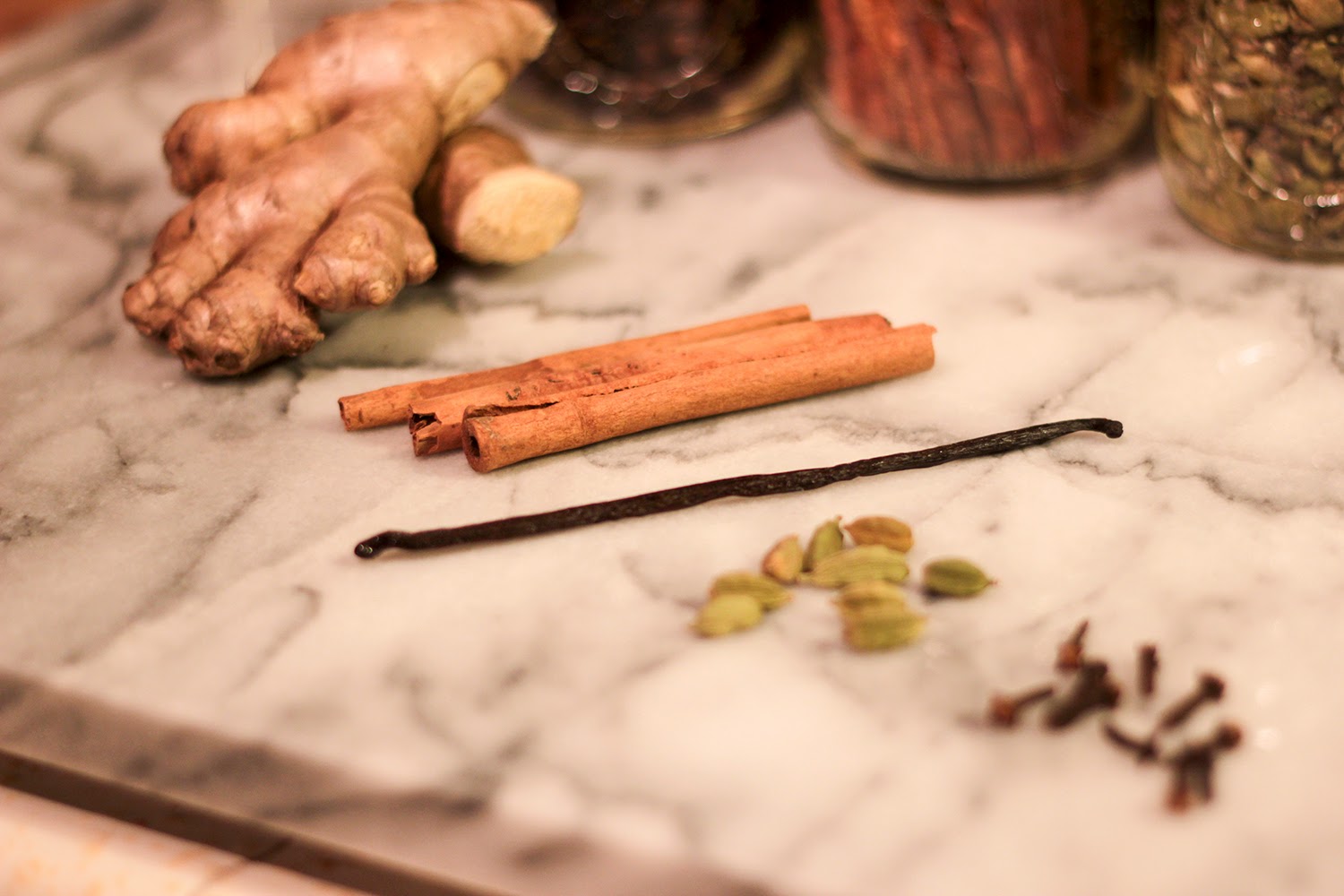 That being said, I think if you want to make your own chai, you should either start from where the rest of the internet started, or at least just use this recipe only as a guideline. This is also a bulk recipe, because I drink it daily, so I don't want to have to make it daily (another reason why the ONE recipe wouldn't cut it - heaven forbid I have to count the individual number of cloves in a recipe. No thank you). This also means I buy pounds of each of these spices at a time now.

1/3-1/2 cup black tea, looseleaf is fine (such as orange pekoe), or use 8-10 teabags
Sweetener to your taste, I prefer honey

Note: the "other" recipe calls for star anise and orange zest which I chose not to include. Star anise is not my favorite component of chai, and I've had some blends that just have too much of that flavor overall, which I really don't care for. The orange zest is also just not critical to my taste buds. Again, just a guideline - do what you think sounds best! I've upped the cardamom (doubled, in fact) and like to pack in a lot more ginger, which by the way, I thought was the key to making it spicy. But no, truth is that the amount of pepper you add seems to be what really puts it in the right spicy spot. I'm sure you could go over board, so be careful.

This makes about 8-10 regular size mason jars worth of concentrate, which should be mixed 1:1 with your milk of choice (soy, almond, whole, skim, whatever you want).

You'll need a large stock pot, a fine strainer, possibly a funnel or a spouted cup for pouring, and the jars to store it in when you're done. You can also properly can the mix, making it shelf stable, but I go through it so quickly I don't even bother. It should be refrigerated though. At least so I've been told. Again, I don't let it sit around long enough to really find out.

As with most things, after having followed the recipe the first time, I got lazy and started just eye balling how much of each spice I wanted. But, after having some friends over who wanted to learn to make their own chai, I realized that having some gauge of measurement would be more helpful than "one Kathy heaping handful," so you can thank them for inspiring me to figure out the rough measurements for you.

To start, clean off your ginger root and chop it roughly. Don't even bother peeling off the skin. 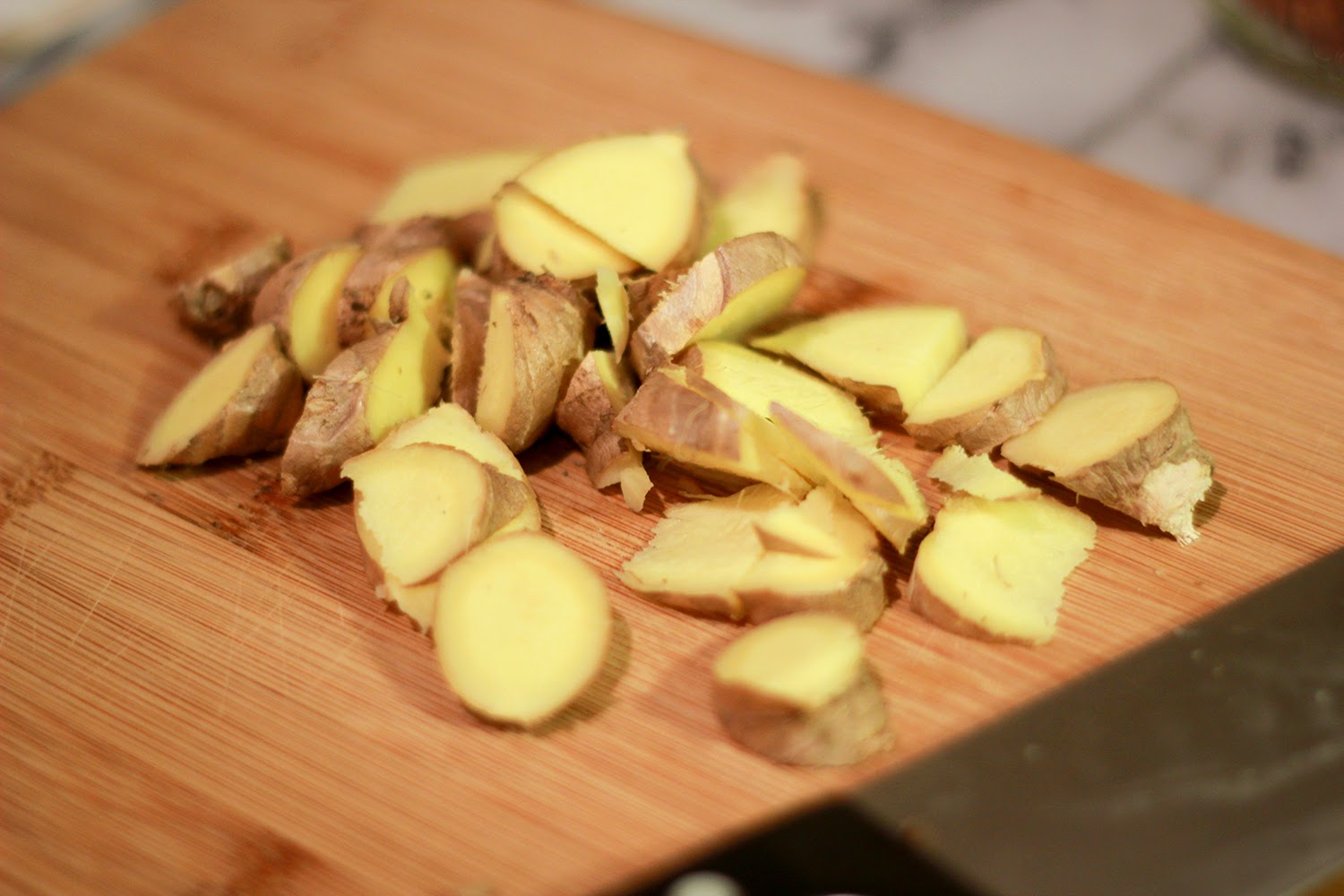 Then you can dump the rest of the spices (through to the vanilla beans) in the pot and add the water. Get it boiling and go ahead and leave it rolling for a good 20-30 minutes. Your house will smell amazing. The mix will reduce a bit, down by a cup or two. Just a fair warning that you're not getting 12 solid cups of chai concentrate out of this just because you put in 12 cups of water. 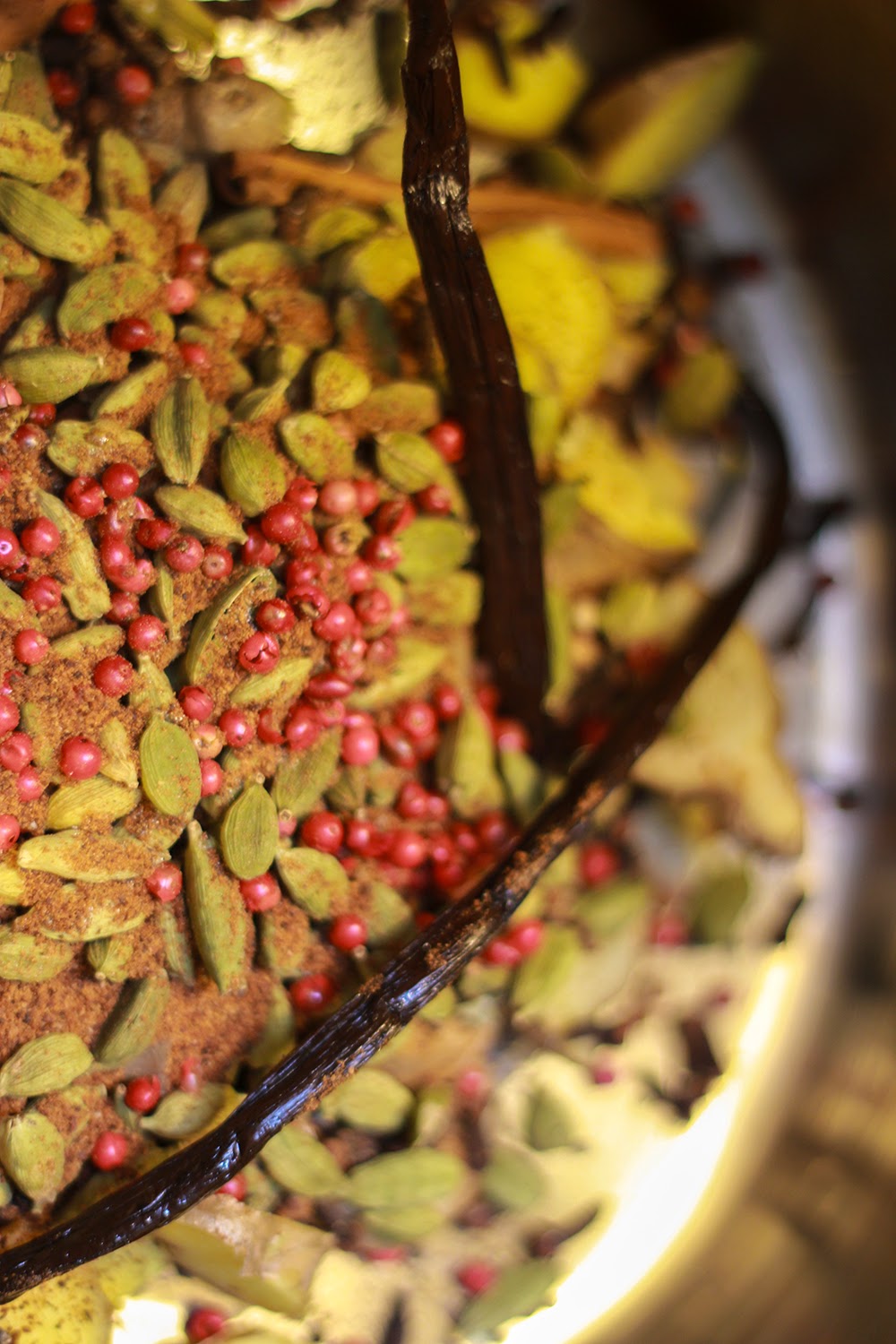 Turn off the heat and add the tea and let it steep about 5-10 minutes depending on how strong you like it. I defer on the lighter tea side myself.

Drain the mix over a fine meshed strainer into a large pot or bowl (if it has a handle and spout, great, you will be saving yourself a step). I used to try very hard to squeeze all the water out of the spice dregs, but realized it was returning more sediment than liquid, so now just let the strainer rest over the bowl for a few minutes to let gravity do its part.

You can choose to add your sweetener at this point. I prefer to just sweeten each cup as I drink it, so I have not figured out a proper measurement of honey or sugar to advise you on this step. Good luck.

After sweetening, or not, you should probably let it cool off a bit before jarring (unless you're canning, of course). When ready, you'll want to start pouring it into your containers, either directly or in batches with a ladle or liquid measuring cup. Just do whatever works for you and your set up.

There you have it. A sweet, spicy, warm cup of chai to get your morning started right. Cheers to the next 5 years! 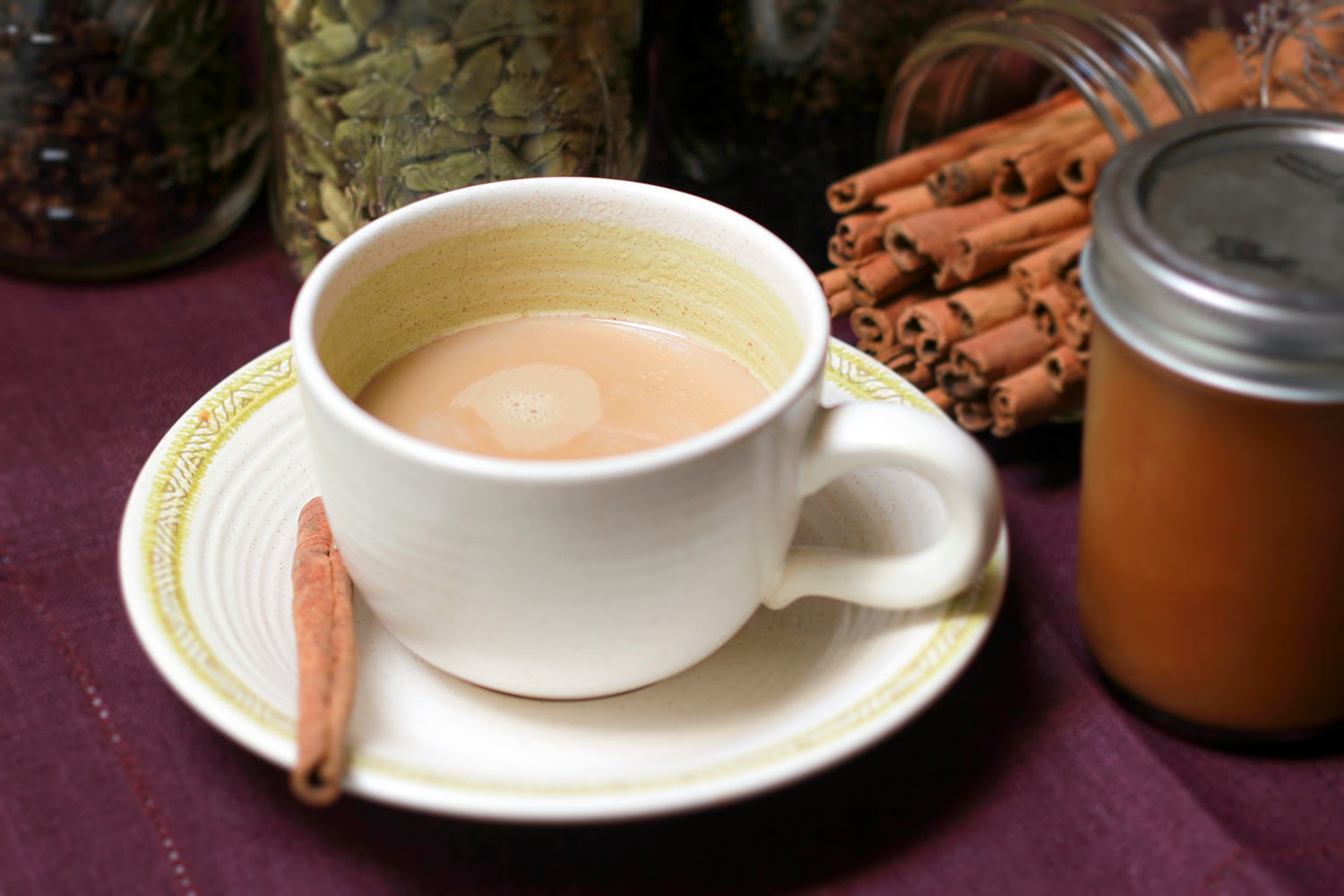